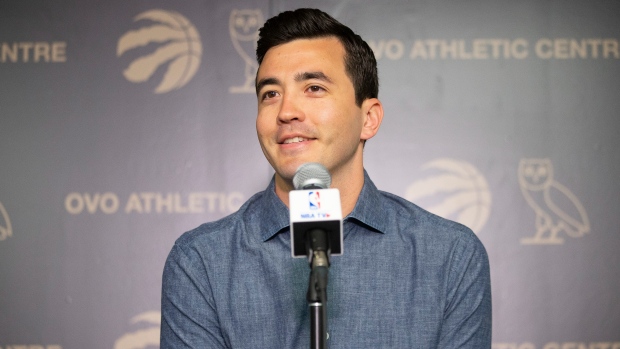 The Chicago Bulls have started a formal search process to hire a new top executive, according to ESPN's Adrian Wojnarowski, and among the candidates the team is interested in is Toronto Raptors general manager Bobby Webster.

Ownership has discussed the plan with Executive VP of Basketball Operations John Paxson and GM Gar Forman, sources said. Paxson is likely to continue in an advisory role with franchise; there are expected to be more conversations with Forman about his future too. https://t.co/zLRRfjsFey

Among the Bulls initial plans will be to seek permission to interview Denver Nuggets general manager Arturas Karnisovas and Toronto GM Bobby Webster, among other candidates, sources tell ESPN.

The candidate that the Bulls choose, per Wojnarowski, will be given full authority on basketball decisions. The team has already discussed their plan with EVP John Paxson and GM Gar Forman, according to Wojnarowski, with Paxson likely to remain with the team in an advisory role. The Bulls are expected to have more conservations with Forman about his future, too, per Wojnarowski.

Masai Ujiri's name is usually the one to come up in these reports, but you're going to start hearing Bobby Webster's as well. He's earned it. As we always say re: Masai, if you're good at what you do, other teams will come calling. Bobby is really good at what he does. https://t.co/5P9u6cMXmf

The Bulls expect to have new leadership in place well before the league resumes play following the NBA's shutdown because of the coronavirus pandemic, according to Wojnarowski, with electronic interviews beginning next week.

Webster, who was the youngest general manager in the NBA at 32 years of age when he was promoted to the position by the Raptors in 2017, has been a member of the team's front office since 2013. The roster that he helped put together alongside Ujiri ahead of the 2018-19 season — which included star player Kawhi Leonard who was acquired via trade — proved to be the best in the NBA, as the Raptors ultimately finished that season as NBA champions. And this season, Webster and Ujiri's Raptors were able to achieve a 46-18 record, which was second-best in the Eastern Conference and third best overall in the entire NBA, before the league suspended play because of the COVID-19 pandemic.

Along with helping Toronto capture its first-ever NBA title, Webster is often also credited for the role he played in the Raptors drafting Pascal Siakam, who captured the 2018-19 NBA Most Improved Player award and was named an all-star this season, and for signing Fred VanVleet, who went undrafted but has ultimately turned out to be a key player for Toronto.