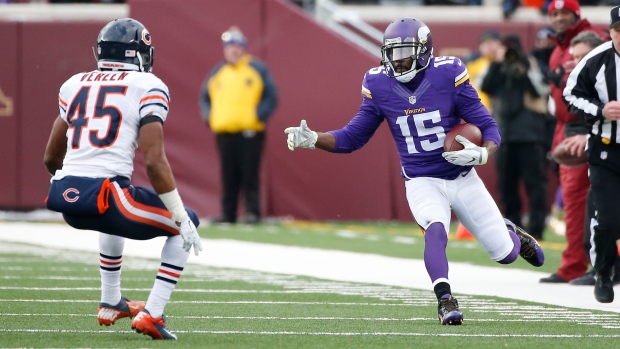 DAVIE, Fla. - The Miami Dolphins acquired a veteran target for Ryan Tannehill on Wednesday, and reinforced his protection too.

Free agent receiver Greg Jennings signed two weeks after visiting the Dolphins, two people familiar with the negotiations said. The people confirmed the deal to The Associated Press on condition of anonymity because the team hadn't announced an agreement.

The Dolphins also signed veteran offensive linemen Jeff Linkenbach and Jacques McClendon to one-year contracts, giving the team some much-needed depth and flexibility in an area that has been troublesome the past two years.

The Minnesota Vikings released Jennings last month after acquiring receiver Mike Wallace from Miami in a trade. Jennings would have counted $11 million against the Vikings' salary cap this year.

A nine-year veteran, Jennings led the Vikings last season with 59 receptions for 742 yards and six touchdowns. He had three consecutive 1,000-yard seasons with Green Bay, but in the past three years he has totalled only 14 touchdowns while averaging 11.7 yards per catch.

The Dolphins needed a veteran receiver after parting this off-season with Wallace, Brian Hartline and Brandon Gibson. They acquired 23-year-old receiver Kenny Stills in a trade with New Orleans.

Even with the addition of Jennings, Miami might take a receiver with the No. 14 overall pick in the draft next week. An offensive lineman is also a possibility, despite the addition of Linkenbach and McClendon.

Linkenbach has made 36 starts in his five-year career, including three last season — all at left guard — with the Kansas City Chiefs. He joined the Indianapolis Colts as an undrafted rookie in 2010 and started all 16 games at tackle in 2011, but allowed 8 1/2 sacks and eventually was relegated to a reserve role.

Linkenbach will likely compete with Dallas Thomas for a starting job at left guard, but he has started at every position in the line except centre.

"I've had a decent amount of success at each of those positions and am comfortable playing in or out, depending on need," he said. "I'm ready to do whatever is necessary."

That should sound good to Tannehill, who has been sacked 104 times in the past two years.

McClendon has three career starts at guard and two at centre. He was a fourth-round pick by the Colts in 2010 and spent the past two years with the Jacksonville Jaguars. He has been on the practice squads with three other teams.

"I've been a swing guy that has been able to step in and do whatever a team needs," McClendon said. "That has pretty much my M.O., just being able to contribute any way possible and trying to be a valuable tool for any team that would allow me to do that."

McClendon raved about Linkenbach, his teammate with the Colts in 2010.

"Jeff is an astoundingly smart human being," McClendon said. "He's another guy that is very versatile, can play guard and tackle and is kind of a Swiss Army Knife guy. He's definitely a valuable piece."