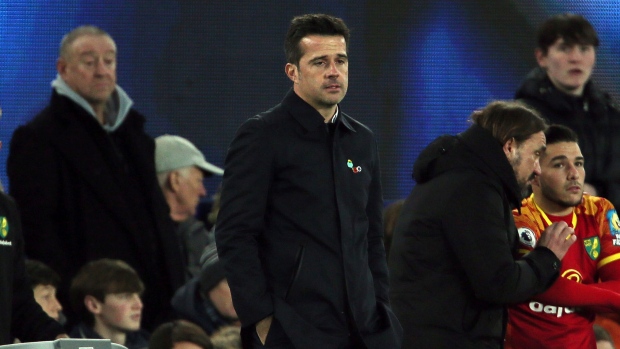 LIVERPOOL, England — Everton has fired manager Marco Silva, a day after losing 5-2 at Merseyside rival Liverpool to slip into the relegation zone in the Premier League.

Silva, who was in charge at Goodison Park for 18 months, becomes the fourth manager in a little over two weeks to lose his job in England’s top division, after Mauricio Pochettino at Tottenham, Unai Emery at Arsenal and Quique Sanchez Flores at Watford.

Everton said Duncan Ferguson will take temporary charge of the team for the game against Chelsea on Saturday. The club said in a statement that it “aims to confirm a new permanent manager as swiftly as possible.”

Former manager David Moyes has been linked with a return to the club.

The thrashing by Liverpool was Everton’s ninth loss in 15 games in the league, leaving the team in third-to-last place despite its benign run of fixtures to start the season.

Everton’s majority shareholder, Farhad Moshiri, made the decision to remove Silva ahead of games against Chelsea, Manchester United, Arsenal and Manchester City in the league.

Silva has also been manager of Hull and Watford in the Premier League.

Moshiri has yet to have a return on his heavy spending since becoming majority shareholder at Everton in February 2016. Three managers have been released in his time at the club — Ronald Koeman, Sam Allardyce and now Silva.