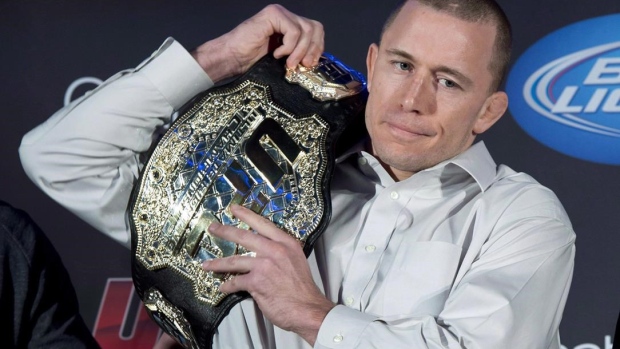 Canada's most decorated mixed martial artist is calling time on his illustrious career.

The UFC has called a press conference for Thursday at the Bell Centre in Montreal where RDS's Benoit Beaudoin reports that Georges St-Pierre will announce his retirement.

St-Pierre, who turns 38 in May, last fought in the Octagon in November of 2017 - following a nearly four-year absence from the sport - at Madison Square Garden where he defeated Michael Bisping for the middleweight title. He never defended the championship and eventually relinquished it citing medical reasons.

A native of Saint-Isidore, Que., St-Pierre will end his career with a 26-2 mark (21-2 UFC) and as one of only six fighters to hold titles in two weight classes.

Saint-Pierre was a two-time UFC Welterweight Champion, defeating Hall of Famer Matt Hughes for the title in 2006 and regaining it from the man who took it from him in his first defence, Matt Serra, in 2008. St-Pierre would go on to successfully defend his title on 10 occasions with the last coming in November of 2013 with a split-decision victory over Johny Hendricks before officially vacating the belt the following year.

Defeats to Hughes and Serra were the only blemishes on his record, but both losses were avenged (GSP would end up beating Hughes on two occasions).