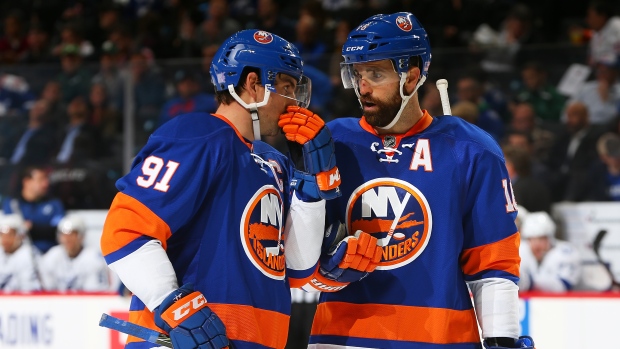 New York Islanders general manager Garth Snow is looking to make a change, just not with his head coach.

On the heels of Snow backing Capuano to TSN Senior Hockey Reporter Frank Seravalli, Newsday's Arthur Staple reports the general manager is "trying hard" to trade for a forward to help the Islanders out of their current slump.

With @frank_seravalli reporting Snow's vote of confidence for the coaching staff, #Isles are trying hard to make a deal for a forward...

Staple wrote earlier Wednesday that the Colorado Avalanche and Islanders had been scouting each other's rosters of late but believes a major deal, such as one for Matt Duchene, remains unlikely.

So would GS give up one of Beauvillier/Barzal-Ho-Sang for a high-end forward? Those are the three prospects other teams covet.

The Islanders took a 4-0 loss at the hands of the Tampa Bay Lightning on Monday night and sit last in the Eastern Conference with 13 points through 16 games.

Capuano pointed to a need to create offence after Monday's loss, which left the Islanders with three goals in their previous three games.

“We have the players in there who can score goals," Capuano told Staple. "I have to find the right combinations to find some offense. We’ve been able to do that in the past as a staff.

“We just have to find a way to get some offense, and that’s on me.”