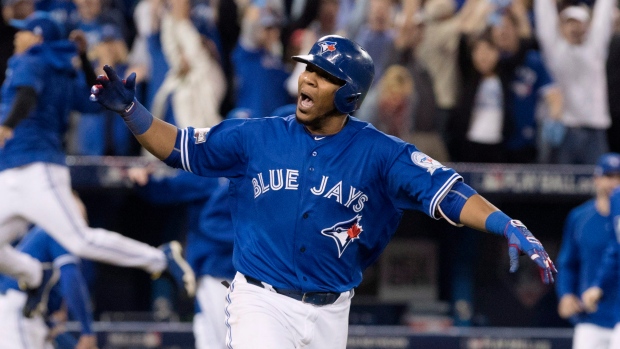 Encarnacion, 33, is set to hit free agency this offseason and is coming off a 42 home run campaign. He's also added seven RBI and three home runs in the playoffs, including a three-run walk-off against the Baltimore Orioles in the wild-card game.

Heyman reports the Blue Jays plan to qualify both Encarnacion and fellow free-agent Jose Bautista, who is not expected to re-sign with the club. According to Today's Knuckleball, the Jays would like to bring back Encarnacion on a three-year deal as bridge for younger players to develop, but could go up to four years.

Ken Rosenthal of Fox Sports reports qualifying offers are expected to be $17.2 million this offseason.

Source: Qualifying offer this off-season will be $17.2M. System expected to remain in place in new CBA, with possible adjustments.

Despite the play for the Domincan Republic native, Heyman writes "no one will be surprised" if Encarnacion departs for another team this winter.

The Blue Jays open the ALCS on Friday night against the Cleveland Indians.