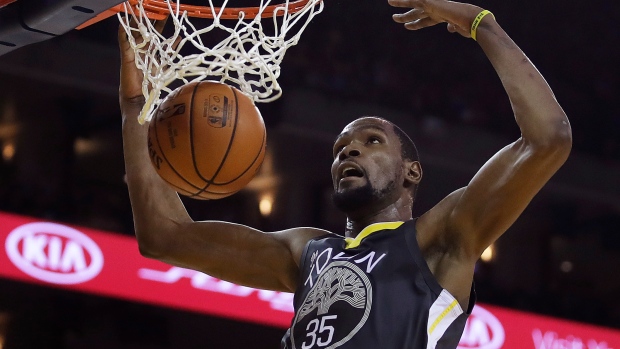 Although, there was hope he would return midway through the series, Warriors head coach Steve Kerr has confirmed that Durant will sit out on Friday.

"The training staff says he's not ready to play yet, that is all," Kerr told reporters on Thursday.

Kerr reiterated that it's not a setback for Durant and that the hope is he can still return before the series is over.

Kerr said Wednesday that Durant has been ramping up his workouts over the past few days and a scrimmage (or something similar) on Thursday would be the next step in a potential return.

Golden State's owner, Joe Lacob, said on ESPN before Game 3 that he is "serious as a heart attack" in his belief that Durant will return at some point during the NBA Finals.

The former MVP has been out since suffering a calf strain in Game 5 of the Western Conference semis. The Warriors have gone 6-2 without him in the lineup, but looked a little more vulnerable Wednesday night considering they were missing guard Klay Thompson as well. Toronto went on to win the matchup 123-109 and take a 2-1 series lead.

“You got to try to have a ‘next man up’ mentality, like we always say,” Steph Curry said after the loss despite his 47-point effort. “And just go out and fight.”

"I'm sure people are happy they're hurt," forward Draymond Green told reporters. "We just got to continue to battle and win the next game, go back to Toronto, win Game 5, come back to Oracle, win Game 6 and then celebrate. Fun times ahead."

After Friday's Game 4, the series will shift back to Toronto for Game 5 on Monday.