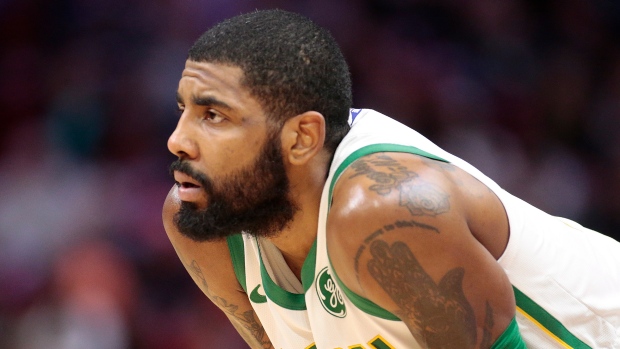 Contrary to a Monday report from the Boston Globe that stated that star point guard Kyrie Irving has "essentially ghosted' Boston Celtics officials in recent weeks, Shams Charania of The Athletic and Stadium reports that Irving has in fact been in communication with the Celtics front office and has actually informed them that he will leave the organization in free agency, likely for the Brooklyn Nets.

Irving decided last week not to opt into his $21.3 million contract for next season and become a free agent starting on June 30. The 27-year-old also recently reportedly fired his longtime agent Jeff Wechsler in favour of Jay-Z's Roc Nation, which also led to speculation that Irving would join the Nets. Besides being a famous rapper from Brooklyn, Jay-Z is also a former Nets minority owner.

Irving spent the last two season with the Celtics after an August 2017 trade brought him over from the Cleveland Cavaliers.

He appeared in 67 games last season, averaging 23.8 points and a career high 6.9 assists per game. Irving also played in nine playoff games as the Celtics were eliminated in the second round by the Milwaukee Bucks.

Irving missed the 2017-18 postseason after playing in 60 games in his first season with the Celtics. He eventually had surgery on his left knee.

Originally selected first overall in the 2011 NBA Draft by the Cavaliers, Irving is a six-time all-star and captured the 2016 NBA Championship.