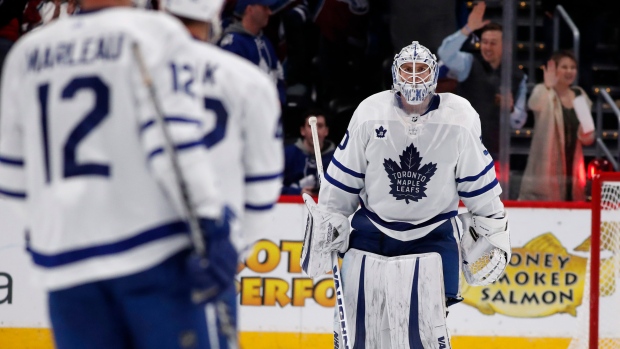 The Toronto Maple Leafs have a potential logjam in the crease behind starter Frederik Andersen and are looking to do something about it.

The Athletic's James Mirtle reports that the team is shopping Calvin Pickard around the league.

Acquired from the Vegas Golden Knights last fall, Pickard appeared in only one game for the Leafs last season, but helped the club's American Hockey League affiliate Toronto Marlies capture the Calder Cup.

A second-round pick in the 2010 NHL Entry Draft out of the Western Hockey League's Seattle Thunderbirds, Pickard spent parts of three seasons in the NHL with the Colorado Avalanche prior to being selected by the Golden Knights in last summer's expansion draft.

The 26-year-old native of Moncton, NB is among the potential options to back up Andersen this season, but incumbent Curtis McElhinney and Garret Sparks sit in front of Pickard in the pecking order.

Because of Andersen's heavy workload, McElhinney, 35, appeared in only 18 games for the Leafs last season, going 11-5-1 with a 2.14 GAA and a SV% of .934. A 10-year veteran, McElhinney has one year and $850,000 remaining on his current contract. McElhinney would need to clear waivers to be demoted to the AHL.

Mirtle notes that if the Leafs were to decrease Andersen's workload this season, then Sparks would make sense as a potential back-up to either emerge as a potential starter down the road or to increase his value for a potential trade. He has one year and $685,000 remaining on his current deal and will be a restricted free agent next summer.