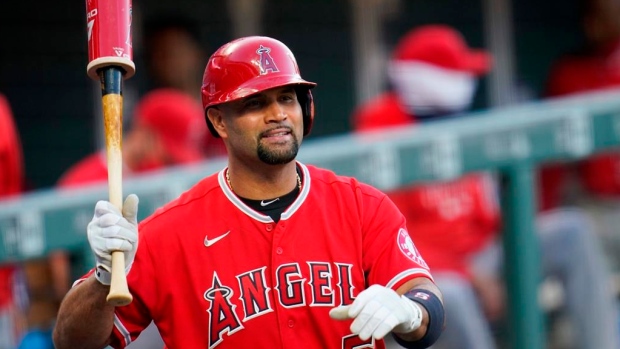 The 41-year-old first baseman is in agreement on a deal with the Los Angeles Dodgers, according to multiple reports.

First baseman Albert Pujols is in agreement on a deal with the Los Angeles Dodgers, sources tell ESPN. First with the news was @jorgecastillo.

Pujols left the Los Angeles Angels earlier this month after nearly 10 seasons with the Dodgers' Orange County rivals. The oldest player in the majors batted .198 this season with five homers and 12 RBIs for the Angels.

Pujols was in the final season of a 10-year, $240 million contract with the Angels, who didn't win a playoff game during his tenure.

“I’m happy for him. I knew he would get an opportunity somewhere. I’m good friends with him. I’m happy for him,” longtime Angels teammate Mike Trout said after a 9-0 loss in Boston.

Pujols is making $30 million this season, and the Dodgers will pay him only the pro-rated portion of the major league minimum salary for the rest of the season, roughly $420,000. The rest will be paid by the Angels.

Pujols is fifth in major league history with 667 career homers and 13th with 3,253 hits, but he has been a low-impact contributor to the Angels for the past half-decade. The Angels said Pujols requested his departure from Anaheim because he didn't want to be a backup, instead intending to play every day for another team.

Yet there's almost no chance of the three-time NL MVP Pujols playing every day for the defending World Series champion Dodgers, who have veteran Max Muncy as their everyday first baseman along with former NL MVP Cody Bellinger, who has been out with an injury since the first series of the season.

Pujols is also moving back to the National League, where the 10-time All-Star can only help as a designated hitter in interleague road games.

But Muncy can also play other positions in the infield, and the right-handed-hitting Pujols could perhaps assuage the Dodgers' relative struggles against left-handed pitching this season. They have .663 OPS against lefties this season, significantly lower than their mark against right-handers.

The Dodgers made a trade Saturday night, acquiring infielder/outfielder Yoshitomo Tsutsugo from the Tampa Bay Rays for a player to be named or cash. The 29-year-old Tsutsugo has struggled in the majors since coming over from Japan, and was hitting .167 in 27 games with Tampa Bay this season.

For all their talent, the Dodgers have been hit hard by injuries early in the season, and Pujols could fill some innings until they return to full strength.

Although he remained a fairly steady power hitter, Pujols is batting .240 with minus-2 wins above replacement over the past half-decade. His career average even dipped under .300 last season for the first time in his two decades in the majors.

Pujols has spent the past five to six years playing at a fraction of his fearsome prime with the St. Louis Cardinals from 2001-11, where he won two World Series championships.

The Dodgers and Angels play 35 miles apart in the LA metropolitan area. While the Angels struggled through Pujols' nine full seasons with just one playoff berth, the powerhouse Dodgers are the defending champions and eight-time NL West champs.