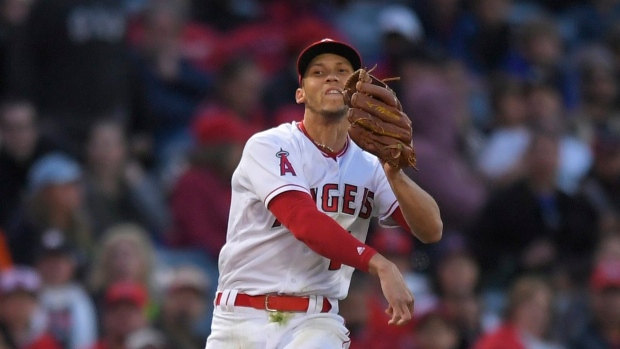 MINNEAPOLIS — The Minnesota Twins and slick-fielding shortstop Andrelton Simmons agreed Tuesday night to a $10.5 million, one-year contract, according to a person familiar with the negotiations.

The person spoke to The Associated Press on condition of anonymity because the deal is subject to a physical exam.

The 31-year-old Simmons, a four-time Gold Glove winner, played the last five seasons with the Los Angeles Angels after spending his first four years in the major leagues with the Atlanta Braves. His fielding ability has been so superb that he received MVP award votes in 2013, 2017 and 2018 despite essentially average production at the plate.

Provided that third baseman Josh Donaldson, last year's prize free agent landed by the Twins, can overcome the calf injury that limited him in 2020, the defence on the left side of the infield in Minnesota ought to be a pitcher's dream. The arrival of Simmons will likely move Jorge Polanco to second base and Luis Arráez into a multi-positional backup role. With Miguel Sanó at first base, the Twins are on track to send out a $46 million infield for the 2021 opener.

Simmons played in only 30 games on the pandemic-shortened, 60-game schedule for the Angels in 2020, missing time due to an ankle he injured for a third straight summer. With LA's post-season chances dwindling, he opted out of the final week of the season.

Simmons is a career .269 hitter with only 386 strikeouts in 4,280 career plate appearances. According to Baseball-Reference data, he's the most difficult active player in the major leagues to strike out, with a career rate of one per 10.24 at-bats.

A native of Curacao who was drafted in the second round by the Braves in 2010, Simmons had his best overall season in 2017 when he batted .278 with 14 home runs, 69 RBIs, 38 doubles and 19 stolen bases. His .981 career fielding percentage ranks third best in baseball among active shortstops, and analytics have long lauded his range at the vital position.

With baseball's slow-moving market beginning to pick up this month, Simmons picked the Twins on the same day that another prominent free agent shortstop, Marcus Semien, agreed to a one-year, $18 million contract with the Toronto Blue Jays, a person familiar with the negotiations told The AP. The Baltimore Orioles also signed shortstop Freddy Galvis to a one-year, $1.5 million contract.