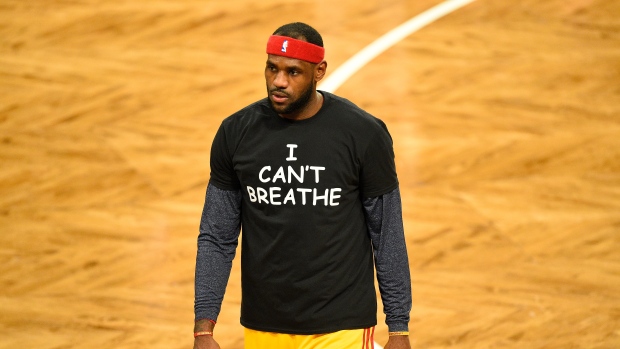 The NBA is planning to paint "Black Lives Matter" inside both sidelines on the courts that will be used for the league's season resumption next month at the Walt Disney World Resort in Orlando, according to ESPN's Ramona Shelburne and Zach Lowe.

Reporting with @ZachLowe_NBA : The NBA is planning to paint Black Lives Matter on the court inside both sidelines in the arenas it will use at the Walt Disney World Resort when it resumes the 2019-20 season late next month, league sources told ESPN.

Some NBA players have shown hesitancy on returning to play amid a fight against racial injustice across the United States and around the world following the death of George Floyd at the hands of a police officer in Minneapolis in late May.

The WNBA might also paint "Black Lives Matter" on their courts when they return next month and are discussing the idea of wearing shooting shirts with "Say Her Name" written on the back, according to Shelburne and Lowe.

The NBA and NBAPA issued a statement last week saying that they will "take collective action to combat systemic racism and promote social justice,” when they return to action.

The league is also planning to allow players to replace the last name on their jerseys with statements on social justice, according to The Athletic's Shams Charania.

The NBA season was paused on March 11 due to the COVID-19 pandemic. The league is targeting a return in a bubble environment that would see 22 of its 30 teams jumping back into action on July 30.