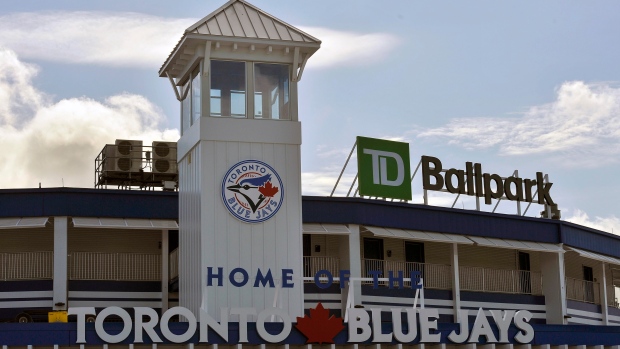 It appears not all of the Blue Jays made it to Toronto on Sunday night.

According to ESPN's Jeff Passan, a number of players remained behind in Florida after a player tested positive for COVID-19. He adds the players who did not travel will remain in Florida for a few days before they are cleared to go to Canada.

After a positive coronavirus test among Toronto Blue Jays players, a number remained behind in Florida while the rest of the team traveled to Toronto for training camp, sources tell ESPN. The players will remain in Florida for a few days before they are cleared to go to Canada.

Members of the team, who had been in Dunedin, Fla., arrived in Toronto on Sunday evening. CP24 captured footage of the Blue Jays arriving at Rogers Centre, their home stadium.

TSN Blue Jays Reporter Scott Mitchell adds that while a group of Blue Jays are expected to work out in Toronto on Monday, the team is still waiting for test results from Friday. Washington Nationals general manager Mike Rizzo said Monday his team cancelled their scheduled workout because they had not received their results from Friday's tests and the Houston Astros have reportedly done the same.

A group of #BlueJays are expected to be on the field today at Rogers Centre for a private workout, but the team is still waiting for test results from Friday, per source.

MLB testing is a COMPLETE mess.

The Blue Jays' arrival in Toronto amid the pandemic came after the team received clearance from the municipal, provincial and federal levels of government to host a summer training camp ahead of the start of the delayed MLB season, which will begin later in July.

Despite being cleared to host its training camp in Toronto, a decision on where the Blue Jays will play their home games has not yet been made.