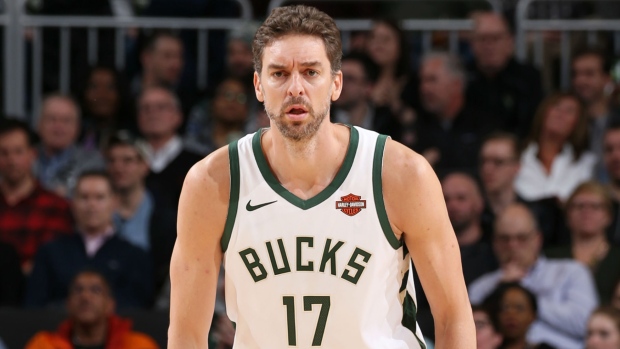 Pau Gasol's legendary NBA career appears to be at its end.

Pau Gasol and Barcelona are near an agreement in principle for the return of the Spanish icon to his native country. He'll sign a one-year deal in order to be ready to finish his Hall-of-Fame worthy career in the Tokyo Olympics. Deal expected to be finalized later in the summer

The 40-year-old Gasol aims to play in next summer's Tokyo Olympics before calling time on what would be a career that spanned over two decades.

Gasol played for Barcelona prior to heading to North America.

A two-time NBA champion with the Los Angeles Lakers, Gasol signed with the Portland Trail Blazers prior to the 2019-2020 season, but was waived last November before even playing a game. His last NBA action came with the Milwaukee Bucks in the spring of 2019. After being bought out by the San Antonio Spurs, Gasol signed with the Bucks to gear up for a playoff run. But his Bucks stint came to end after only three games when a left-ankle injury required season-ending surgery.

The third overall pick of the 2001 NBA Draft, Gasol appeared in 1,226 career games over 19 seasons with the Memphis Grizzlies, Lakers, Chicago Bulls, Spurs and Bucks.

Internationally, Gasol has been highly decorated, winning medals at three Olympic Games and winning gold at the 2006 World Cup in Japan.

Gasol's younger brother, Marc Gasol, is a member of the Toronto Raptors.