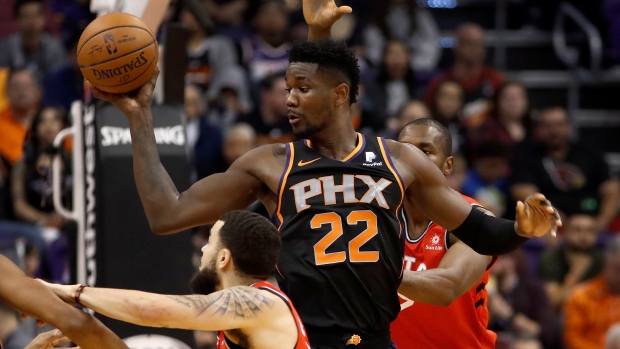 Centre Deandre Ayton was suspended 25 games without pay by the NBA on Thursday night for violating the terms of the NBA/NBPA Anti-Drug Program by testing positive for a diuretic.

The first overall pick last year out of Arizona, Ayton averaged 16.3 points and 10.3 rebounds as a rookie and was hoping to have a jump in production in his second season.

He had 18 points, 11 rebounds and four blocks Wednesday night in the Suns' season-opening home victory over Sacramento. Ayton was especially proud of the blocks, telling media after the game that new coach Monty Williams had put a huge emphasis on defence and rim protection.

But the good vibes from that victory have quickly evaporated.

"On behalf of the Phoenix Suns organization, Monty Williams and I are disappointed in the actions by Deandre Ayton that led to his testing positive for a banned diuretic and subsequent suspension by the NBA. This does not uphold the standards and principles we have set for the team," Suns general manager James Jones said in a statement released by the team.

"Deandre has expressed his deepest remorse. While he is suspended we remain committed to his growth and development on and off the court. His actions are not taken lightly, and we are committed to ensuring that Deandre understands the profound impact it has had on the team, organization, and Suns community."

Ayton was upbeat after Wednesday's win, giving no indication that he was about to miss nearly a third of the season. Phoenix had a 19-63 record last season but hoped for a fast rebuild with a roster that was built around Ayton and high-scoring guard Devin Booker.

Now they'll be without Ayton until mid-December unless the suspension is reduced through the arbitration process.

"I want to apologize to my family, the entire Suns organization, my teammates, partners, our fans and the Phoenix community," Ayton said in a statement. "This was an unintentional mistake and unfortunately I put something in my body that I was completely unaware of."

"I do understand the unfortunate impact that this has on so many others, and for that I am deeply sorry. I'm extremely disappointed that I've let my team down. I will continue to work with the Players' Union (NBPA) to go through the arbitration process and am hopeful for a positive resolution."

Ayton won't be eligible to return until a road game against the Los Angeles Clippers on Dec. 17. Phoenix plays at Denver on Friday night.