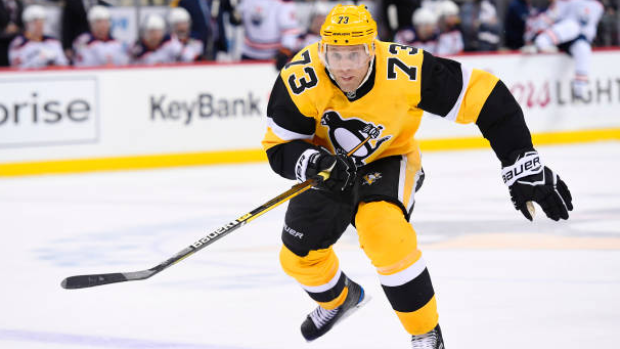 According to Josh Yohe of The Athletic, the Pittsburgh Penguins have advised defenceman Jack Johnson that he could be moved prior to the opening of the regular season this week.

Yohe reports that Penguins general manager Jim Rutherford is exploring multiple potential deals and many of them include the 32-year-old defenceman. Rutherford previously said he was looking to move a goaltender before the season.

Johnson, who joined the Penguins last July on a five-year, $16.25 million contract, ended the preseason as the team's seventh defenceman, behind Kris Letang, Justin Schultz, Brian Dumoulin, Marcus Pettersson and Juuso Riikola. He posted one goal and 13 points in 82 games with the Penguins last season.

As Yohe notes, Pittsburgh currently sits $400,000 over the salary cap and must become cap compliant ahead of the season this week. He reports that it's believed two NHL teams are currently willing to take on Johnson's contract, though specifics of any deal remain unknown.

Johnson's $3.5 million cap hit is fifth-highest among Penguins defencemen and he sat fourth among the group in average ice time last season, at 19:16 per game. The third-overall pick in the 2005 NHL Draft, Johnson has 67 goals and 291 points in 870 career games.

The Penguins will open their season on Wednesday against the Buffalo Sabres.