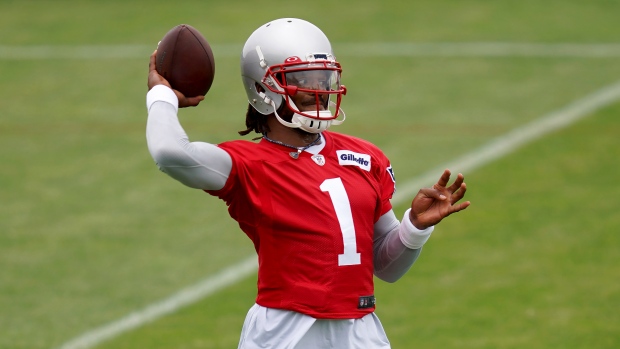 Cam Newton is expected to take all his regular reps at New England Patriots minicamp this week, two weeks after sustaining a hand injury, according to a report from the Boston Globe's Jim McBride.

According to a league source, Cam Newton is expected to to handle his full complement of reps all week at #Patriots minicamp beginning today. Story upcoming at https://t.co/BIqlcKzPKK

Newton's hand injury was never thought to be serious and he appears set to return to full action with the Patriots this week.

While Newton will be back on the field for New England, the Patriots will be without cornerback Stephon Gilmore.

McBride also reported the perennial Pro Bowler will not be in attendance during the Patriots' mandatory minicamp this week.

NFL Network's Ian Rapoport added Gilmore wants a new contract while he continues to rehab from a partially torn quad.

#Patriots star CB Stephon Gilmore, who wants a new contract and is rehabbing from a partially torn quad, is not present at the team’s mandatory minicamp today, source said.

*(Spelling fixed, no thanks to autocorrect)

Gilmore has one more year remaining on a five-year, $65 million deal he signed with the Patriots ahead of the 2017 season. He is set to make $7 million in salary with a $3.6 million signing bonus.