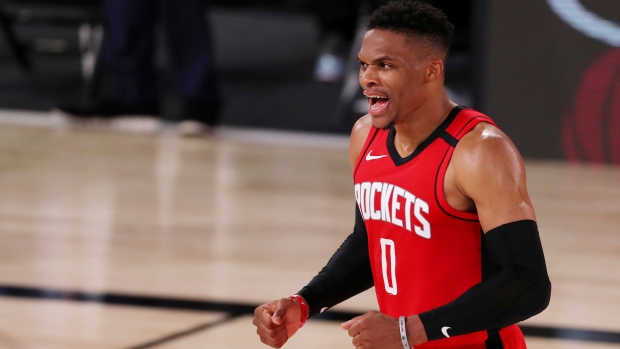 If the Houston Rockets do end up trading Russell Westbrook before the start of next season, it might not happen right away.

According to ESPN's Adrian Wojnarowski, Westbrook's market is "slow developing" regarding a possible trade..

The Athletic's Shams Charania reported earlier this week that the All-Star point guard told the Rockets he wants out. Despite Westbrook looking elsewhere, fellow Rockets star James Harden remains committed to the Rockets and is "locked in" for next season, Charania reports.

While 2019-20 was Westbrook's sixth straight All-Star season, Westbrook and Harden were unable to bring the team past the second round, falling in five games to the eventual champion Los Angeles Lakers.

That spurred changes as head coach Mike D’Antoni was replaced with Stephen Silas and general manager Daryl Morey left his post after 13 seasons.

He was acquired last summer from the Oklahoma City Thunder in exchange for point guard Chris Paul and multiple first-round picks, ending a magnificent run of 11 seasons with OKC.  Westbrook made eight All-Star Teams, won two scoring titles and was named Most Valuable Player for the 2016-17 season after averaging a triple-double.

A native of Long Beach, CA., Westbrook was selected No. 4 overall the Seattle SuperSonics – now the Thunder – in the 2008 draft out of the UCLA.