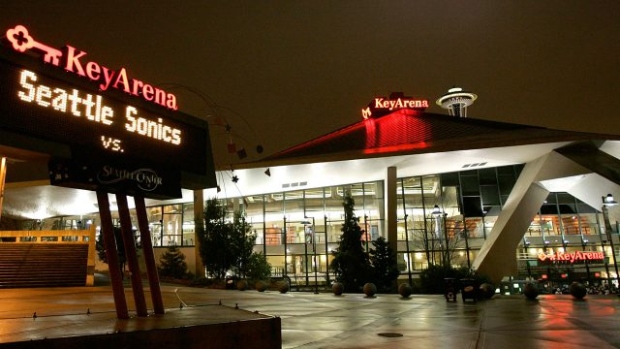 SEATTLE — A proposal to remodel KeyArena now has an ambitious timeline that could have it ready to house a professional franchise within three years.

The timeline was laid out in a proposed memorandum of understanding between Seattle and Oak View Group. The MOU will be presented to the Seattle City Council on Tuesday but the final version of the agreement won't be voted on until the first week of December at the earliest.

Still, the draft agreement is a significant step in the process of redeveloping the city-owned building through a privately financed project that officials believe will finally lure the NHL or NBA — or both — to Seattle. KeyArena housed the NBA's SuperSonics until they relocated to Oklahoma City and became the Thunder. Oak View Group believes it can have the building ready by October 2020 if environmental approvals are obtained and demolition can start in October 2018.

"I think the most important part of this MOU is the fact it states very clearly to the leagues that this project is going to happen, we do have a deal with the city, they can make a deal. They are very focused ultimately not only on building a new arena here and giving us the partnership and certainty in order to do that," said OVG CEO Tim Leiweke, the former president and CEO of Maple Leaf Sports & Entertainment in Toronto.

"But more importantly it sends a very strong message now to the NBA and to the NHL that everyone worried about, 'Yeah will it ever get done with the city? Will they ever be able to get to the finish line? Will you ever possibly get this deal done within the politics of Seattle and the Seattle process as everyone likes to call it?'" Leiweke said. "Guess what? Game, set and match. We clearly send a message to everyone that this will get done, this will get built and we are ready now to go get one and hopefully soon, two teams."

The timeframe is sure to attract attention, including from the NHL. OVG has not hidden its intentions to be aggressive in an attempt to obtain an NHL expansion franchise soon after the arena agreement is finalized. Likewise, the NHL has not hidden its interest in Seattle, the No. 14 media market in the country and the only market in the top 25 that does not have an NBA or NHL team.

OVG has lined up billionaire David Bonderman and filmmaker Jerry Bruckheimer as the lead owners for a potential NHL franchise.

"From our standpoint, this timeline is geared toward what we believe is the optimal timeline in order to begin to get a team or two for Seattle," Leiweke said.

The project is expected to total about $600 million and Oak View is also on the hook for another $40 million to help improve transportation in the area around Seattle Center. They are also responsible for regular facility upgrades for the life of the 39-year lease agreement. Should those upgrade requirements be met, there are two eight-year lease extensions that will be activated, and carry the entire life of the lease agreement to 55 years.

In all, OVG is liable for about $168 million in capital investment upgrades on the facility during the life of the lease. The project will be financed through a mix of revenue streams. OVG also has financial backing from Madison Square Garden Entertainment.

Among the other details of the MOU:

— OVG will be required to pay yearly rent equal to what the city is making off KeyArena now, estimated to be $2.6 million at the start.

— OVG will pay for the displacement and relocation of existing tenants on the Seattle Center campus during the construction.

— OVG will assume the city's current obligation to the Seattle Storm or arrange a new deal with the WNBA team.

"One of the principals that we had was the city would never go backward as far as its ability to maintain the revenues that were received through the operations of KeyArena going forward," said Brian Surratt, the director of the Office of Economic Development for the city. "We would be partners in any deal moving forward."

The negotiations between the city and OVG have come as a similar agreement between the city and investor Chris Hansen is in its final stages. Hansen and the city agreed to an arena plan in 2012 that was contingent on Hansen acquiring an NBA team and included some public investment in a project to be constructed near Safeco Field.