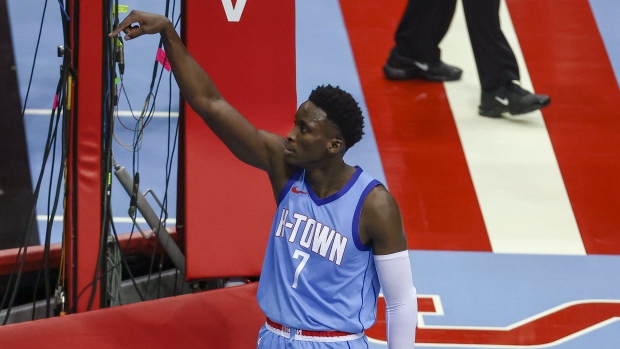 Rockets guard Victor Oladipo sat out due to personal reasons as the Houston Rockets took on the Charlotte Hornets Wednesday night with the trade deadline less than 24 hours away.

ESPN's Adrian Wojnarowski reports the Rockets continue to be engaged on several fronts in trade talks surrounding the veteran scorer.

Wojnarowski reported Tuesday that Houston is "increasingly comfortable with the offers on Oladipo in the marketplace, which include young players and first-round pick combinations that the franchise believes are suitable returns to make a deal."

Originally acquired on Jan. 13 in a three-team trade involving James Harden, Oladipo declined a two-year extension offered by the Rockets, indicating he would not be part of Houston's plans going forward.

The 28-year-old is averaging 20.8 points, 5.0 rebounds and 4.7 assists a night in 29 games split between the Indiana Pacers and Rockets this year.

This is his eighth NBA season after being selected No. 2 overall by the Orlando Magic in the 2013 draft out of Indiana.