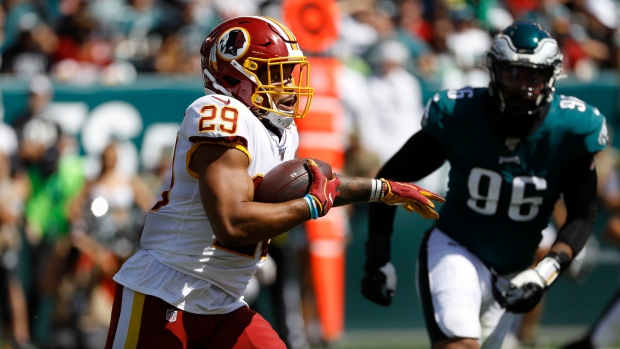 After missing all of last season, the injury troubles keep on coming for Derrius Guice.

According to the NFL Network's Ian Rapoport, the Washington Redskins running back had an MRI Monday morning on his knee and is likely to miss some time.

Sources: #Redskins RB Derrius Guice had an MRI this morning on the other, non-ACL knee and he’s likely to miss some time. The hope is he does not need surgery, but the team is doing a full evaluation. He gained 18 yards on 10 carries, looking like he wasn’t himself.

Rapoport adds that it is not the knee Guice had surgery on last year to repair an ACL tear, but the other knee. The team is hopeful he does not need surgery but are doing a full evaluation.

After coming into the year with high expectations, Guice gained just 18 yards on 10 carries Sunday in Week 1 against the Philadelphia Eagles. He also caught three passes for a total of 20 yards but did not find the endzone.

Washington has Chris Thompson, Wendell Smallwood and Adrian Peterson as running backs on their current roster.

They will host the Dallas Cowboys in Week 2.