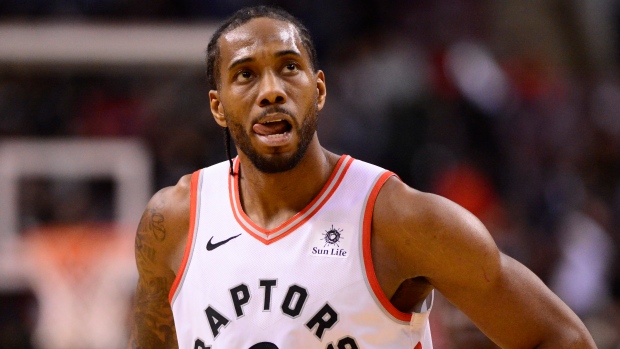 TORONTO — It was a heck of a season, but it appears that's all the Toronto Raptors are going to get from Kawhi Leonard. Won and done.

Less than a month after leading the Raptors to their first NBA title, the superstar free agent is heading home to the Los Angeles Clippers where he'll play alongside Paul George in a massive trade for players and draft picks.

Leonard ended nearly six days of frantic nailbiting by fans and massive speculation around the league when he finally decided to sign with L.A., doing so only after the Clippers swung their deal to land George. ESPN first reported the trade that saw the Thunder getting Hamilton, Ont., native Shai Gilgeous-Alexander and Danilo Gallinari from the Clippers.

Leonard's departure marks the first time a reigning NBA Finals MVP has changed teams before the next season. Leonard was also pursued by the Los Angeles Lakers and, of course, the Raptors.

"We are very thankful for the year that Kawhi and Danny played with us here in Toronto, and I know the city and the entire country of Canada are grateful for everything they did to help us to win our first NBA Championship," Raptors president Masai Ujiri said in a statement. "On behalf of the Raptors, I say a very heartfelt thank you to Kawhi and to Danny, and we send them and their families nothing but good wishes.

"As an organization, the Raptors will focus on the future and continue our pursuit of a second championship."

Leonard, who was arguably the most coveted prize in this year's free agency, reportedly agreed to a four-year, US$142 million max contract, which he could sign as early as noon ET on Saturday. Danny Green departed right on Leonard's heels, signing a two-year, US$30-million deal with the Lakers.

"It's been unfortunate how things turned out for everybody, and the city of Toronto and Canada that we couldn't run it back. Kawhi has made his decision. Seems like the announcement is out," Green said in a video he posted to his social media accounts. "It's time for me to make my announcement ... I will be teaming up with new teammates in LA, the Los Angeles Lakers.

"Had a fun time in the city of Toronto ... always have a great place in my heart, will never forget the historical run that we had," said Green.

The news ends months of speculation and angst for Raptors fans, that has only heated up as the days wore on after free agency opened last Sunday.

The top 10 Twitter trends in Toronto were about the move on Saturday morning as Raptors fans woke up to the news. The hashtags #ThankYouKawhi and #ThankYouDanny were both trending. Toronto Mayor John Tory tweeted: "Our #KawhiWatch has ended. #ThankYouKawhi for the NBA championship that you helped to bring to Toronto with your @Raptors teammates. #ThanksKawhi #WeTheNorth."

His tenure in Toronto ended with a wild few days of free agency that included tracking trips to California by the plane owned by Raptors parent company Maple Leaf Sports & Entertainment Ltd., and Toronto news station CP24 following a black van by helicopter that may or may not have had Leonard in it.

Billboards encouraging Leonard to stay emerged in Toronto, with signs also popping up in Los Angeles calling on the star forward to return home.

Leonard's departure was considered by many to be a foregone conclusion a year ago when Raptors president Masai Ujiri acquired him from the San Antonio Spurs in an off-season blockbuster that sent beloved franchise icon DeMar DeRozan to Texas.

Leonard had a year left on his contract plus a player option — which he was certainly going to decline — when he moved to Toronto, and many believed he'd put in a season in Canada before bolting for Los Angeles.

The Raptors certainly made Leonard's decision a tough one. After Leonard missed all but nine games the previous season in San Antonio with a serious quadriceps injury, he said health was his biggest concern heading into this campaign.

Toronto responded by treating the superstar, who turned 28 on Saturday, with kid gloves. They made "load management" part of the NBA lexicon, holding him out of back-to-back games for health maintenance.

It all paid off in the playoffs, as Leonard had one of the best performances in NBA post-season history in leading the Raptors to their first Larry O'Brien Trophy. He was excellent on both sides of the ball as they dispatched Orlando, Philadelphia, Milwaukee and finally the two-time defending champion Golden State Warriors. He was rewarded with his second career Finals MVP award.

There were iconic moments along the way, including Leonard's series-winning final shot in Game 7 against the 76ers that bounced on the rim four times before falling, sending the Scotiabank Arena crowd into a frenzy.

Leonard's status as a sports icon in Toronto and across Canada perhaps closed the gap between the Raptors and other suitors. But ultimately, the lure of home proved too much and what Toronto had to offer wasn't enough.

His departure is a massive blow to Toronto's chances of back-to-back titles, and obviously puts a damper on the Lakers' off-season quest as well — even though they will finalize a trade Saturday to bring in Anthony Davis from New Orleans and landed the sort of shooter than LeBron James craves by adding Green.