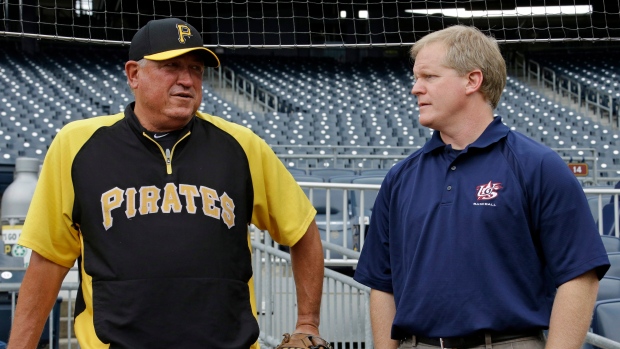 The general manager, team president and charismatic manager helped a moribund franchise emerge from two decades of losing to briefly become a contender.

Beginning in 2016, however, the momentum stalled and the losses piled up. Now, the three men integral to reconnecting the city and the team are out of work, part of a "refresh" chairman Bob Nutting felt necessary following a last-place finish in the NL Central.

On Monday, Pittsburgh fired Huntington, who had two years remaining on the extension he signed in 2017. The move completed an overhaul that began with Hurdle's dismissal on the final day of the regular season and continued last week when Coonelly walked away after 12 years as president.

Former Pittsburgh Penguins chief operating officer Travis Williams will replace Coonelly, hoping to do for the Pirates what he did with the Penguins, who won three Stanley Cups with Williams' in the fold between 2009-17.

Williams, whose relationship with Nutting dates to his time as outside counsel for the Pirates, said the club will be on "a little bit of a journey" as it plots a way forward.

"This is not going to be where we flip the switch and the next day, all of a sudden, we're in the World Series," Williams said. "We're going to have to get a GM in place, put a plan in place that charts a path forward within the framework that we're operating that we can get back to being a very successful team."

Coonelly arrived in Pittsburgh in 2007 and promptly hired Huntington. Hurdle came on board in 2010 and together they helped the Pirates end a 20-year streak of futility. Pittsburgh reached the playoffs three straight years (2013-15) but began to slide out of contention in 2016.

The team has finished under .500 in three of the last four seasons, including a 69-93 record in 2019 following a second-half collapse in which Pittsburgh went 25-48 after the All-Star break. The meltdown was marked by altercations involving players, coaches and support personnel, and the arrest of All-Star closer Felipe Vazquez on felony charges tied to a sexual relationship with an underage girl.

Nutting appeared to give Huntington a vote of confidence when the team fired Hurdle, saying on Sept. 29 he strongly believed "Huntington and the leadership team that he has assembled are the right people to continue to lead our baseball operations department."

After what he called a "thorough review," Nutting changed course. Saying the team's issues were "deep," Nutting fired Huntington. He said he didn't want Huntington to feel like a "lame duck" while working for a new team president.

"It seems to me he was already so much on the hot seat that you can't have his job even more unstable than it became in the last month," Nutting said.

Nutting stressed the need for the Pirates to take a sharper approach.

It's an edge Huntington and Coonelly skillfully walked during a methodical buildup that included turning prospects like centre fielder Andrew McCutchen and pitcher Gerrit Cole into stars while supplementing the roster with veterans like catcher Russell Martin and pitcher A.J. Burnett to fill the gaps.

Pittsburgh's payroll topped out at about $100 million in 2015, when the club won 98 games before losing to the Chicago Cubs in the wild-card round. It dipped to $72 million — next to last in the majors — in 2019, two full seasons after Cole was traded to Houston and McCutchen was shipped to San Francisco.

Nutting declined to get into specifics about the team's finances other than to say "it is simply not an accurate narrative that the perception that the team is generating enormous cash and deciding not to fully invest." The Pirates did negotiate a new regional television network deal recently, though Nutting declined to elaborate when asked if the contract will help the club become more aggressive in free agency.

Nutting pointed to the success of the Tampa Bay Rays and Oakland A's — both reaching the playoffs this season despite modest payrolls — that salaries and winning don't go hand-in-hand.

"I think we have seen and embrace that an uneven playing field doesn't mean you can't compete," Nutting said. "I believe we can."

The Pirates averaged 18,412 fans in 2019, down 40 per cent from 30,846 in 2015. Williams said he understands the fans' anger and doesn't necessarily see that as a bad thing. He knows his job is to help transform that passion into a winning product.

"I know we can make it happen," he said.