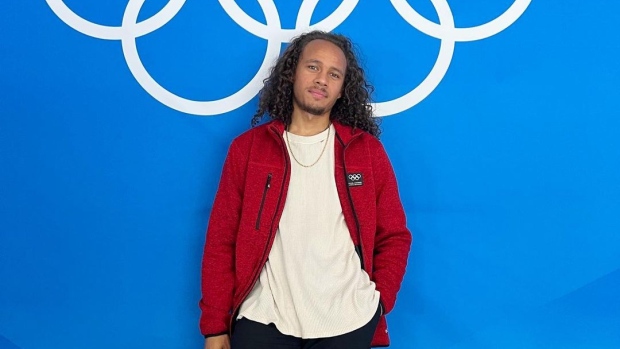 BEIJING — Elladj Baldé calls it the video that forever changed his life.

The Canadian figure skater is turning circles across a frozen, deserted Lake Minnewanka outside Banff, Alta. His Chicago Bulls bomber jacket is flapping open, his hair's tucked up under a black tuque. His arms are outstretched, his face turned up to the sun. His blades carve perfect circles like a Spirograph on the untouched ice.

The video propelled Baldé to online stardom, providing him a vehicle to express his love for skating and connect with new audiences.

As a biracial figure skater, Baldé spent much of his career trying to fit a mould in one of the Winter Olympics' stuffier sports.

"The pressure to conform was intense, and it was conveyed subconsciously to me throughout my journey — being rewarded for using certain music, dressing a certain way and skating with a certain style," Baldé said. "For the most part, each of these elements were inauthentic to who I truly am.

"Mentally, this was difficult to process and further cemented when there wasn't anyone else around who looked like me."

Baldé said when he missed making the 2014 Sochi Olympic squad by one spot, and then missed the podium at the Canadian championships in 2015 — despite a standing ovation for his free program — his entire identity and self-worth was shattered.

Baldé is working for the CBC at the Beijing Olympics, which fall during Black History Month. And while there are no stats on the percentage athletes who identify as Black, Indigenous or a person of colour (BIPOC) — the Canadian team, for example, received few returns on an optional survey — it's painfully obvious, the prevailing face of the Games is white.

Baldé hopes to help change that. His skating videos, which are a joyful mix of backflips, hip-hop moves and traditional skating set to music in stunning settings, have made him a social media sensation. The 30-year-old from Montreal has 1.2 million TikTok followers.

"Ever since embracing my authenticity and performing what feels most natural to me, it's been the single most powerful tool to create change," Baldé said. "It has showed me the world is hungry to see skating in different ways, and that artistry sees no bounds."

Twenty years later, it doesn't feel as though much has changed.

Like Baldé, Canadian bobsledder Cynthia Appiah hopes to shatter the picture of what a winter sport athlete looks like. The 31-year-old isn't just a Black woman in a predominantly white sport, she's a bobsled pilot — even more rare.

It's a disparity four-time world champion Elana Meyers Taylor of the U.S. has been vocal about, saying one of the top sled manufacturers refuses to sell to Black athletes. Appiah compared it to the racist views about Black quarterbacks, that Black athletes "lack intelligence on the field" to be quarterbacks, she said.

Appiah said seeing Canadian Shelley-Ann Brown, who is Black, racing to a silver bobsled medal with partner Helen Upperton at the 2010 Olympics was what sparked her interest in the sport.

"I thought, oh wait, I see myself in her, this is something that I can definitely do," said Appiah, who was third overall on the monobob World Cup series this season. "It's important that people can see themselves in their heroes. I hope my teammates and I can be the same source of inspiration for people watching the Games no matter their background, race or religion."

Vanessa James feels the same way. The 34-year-old from Toronto, who's competing in pairs with partner Eric Radford in Beijing, said "representation is everything.

"If I wasn't here today, there wouldn't be a Black skater at all, and kids at home would be wondering if this sport was for them," she said, after the team event earlier this week. "So, me being here, and even Eric (the first openly gay athlete to win Olympic Winter gold) who speaks a lot to diversity too, and having Maddie (Schizas, in women's singles) here, who's a BIPOC skater, it's incredible."

Schizas's mom is Indian and her dad is Greek.

"It's needed and we have to keep pushing it and reaching out to the grassroots to let them feel that they're welcome, they're included and that they belong," James said.

Brown, who retired in 2012, said she feels humbled to have inspired an athlete as talented as Appiah.

"Then having Dawn (Richardson Wilson, who's Black) as her brakewoman, you've got to be kidding me. It's history being made 20 times over. It's fantastic," said Brown.

The 41-year-old from Oshawa, Ont., was recruited to bobsled from track and field, and remembers feeling, "'What the heck am I doing here?'

"My teammates were amazing, but there were moments of being in Europe and getting stared at or people saying certain things to you or about you to other people, and feeling alone," Brown said. "And then also feeling this instant camaraderie when you find out about one other person. You’re like 'Hey!'"

Brown found that camaraderie, she said, with Lascelles Brown and then Neville Wright, who were both on the men's team.

Janelle Joseph, an assistant professor of critical studies of race and Indigeneity at the University of Toronto, says many Black athletes and coaches, particularly women, experience "this phenomenon of being the only one.

"It's well known that winter sports are not only generally more expensive, but culturally can be really exclusive and in some cases, racist. And so, it's not a surprise to many people that there are so few Black athletes, or racialized athletes in particular sports."

Joseph took her kids snowboarding recently, and the instructor was Black.

"He is the only Black coach who works at the mountain. I got to have a long conversation with him as a coach about being Black in skiing and snowboarding and his experiences, and now we have a personal connection," she said. "If we had shown up and there wasn't that connection … maybe we would go back, but maybe we wouldn't. It's about access."

It's also about socioeconomic barriers. Lift tickets, equipment and ice time are costly. And it's about geography.

"Most racialized communities are concentrated in metropolitan areas, and then having to drive out of the city, to rural, mountainous regions, particularly for skiing (is prohibitive)," Joseph said.

Last year, Baldé and his wife Michelle Dawley, a dancer and choreographer, co-founded the Skate Global Foundation, a not-for-profit which advocates for equity, diversion and inclusion as one of its pillars. Their first initiative was to partner with construction company EllisDon to build and refurbish skating rinks in underserved Canadian communities to increase accessibility. The first opened in December in the Calgary neighbourhood of Temple.

"Figure skating is an incredibly expensive sport and with rinks not often located in underserved communities, a lot of lower income families, many of which are BIPOC, end up being priced out of the sport," said Baldé, whose mom Marina is Russian and dad Ibrahim is from Guinea.

Joseph is a big fan of Baldé's skating TikTok videos, saying they're a great vehicle to slice through sport's cultural barriers.

"So, it's not just: nobody here looks like me, but it's nobody here shares my cultural background or my way of understanding even what movement is, what aesthetically pleasing and beautiful movement is. (Baldé) is a fantastic example of how the definitions of athleticism, especially in the esthetic sports, could shift and change and be absolutely more welcoming to a broader range of people."

This report by The Canadian Press was first published Feb. 9, 2022.