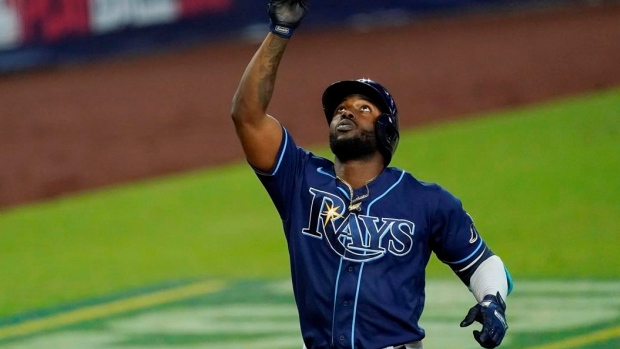 Baseball is a copycat league. When one team is successful, other clubs like to mimic what they are doing. We saw that after Michael Lewis’ book Moneyball came out. Billy Beane and the Oakland A’s found value in players with good on-base percentage, so other teams started valuing those same type of players.

In 2008, the Tampa Bay Rays won the AL East and made it to the World Series, where they lost to the Philadelphia Phillies. The Yankees and Red Sox realized that the speedy, athletic outfield of the Rays was very impactful and that they were stuck with slow sluggers who couldn’t cover enough ground in the field. So, they both set out to become more athletic, like their division rival.

The Houston Astros lost more than 100 games for three straight years from 2011-13, burning their roster to the ground before rebuilding into a championship franchise. The Cubs, Padres, Royals, Tigers, Marlins, Mariners and White Sox are all in the process of doing the same. The belief is that if it worked for them, it will work for us.

The Toronto Blue Jays lost to the Tampa Bay Rays in the wild-card series this year. As a small-market team that is loaded with talent, the current Rays are once again a club to be copied. The Jays had a first-hand look at the Rays and can use them as a barometer, especially since Tampa is the class of the AL East this season.

The Jays outscored Tampa Bay during the regular season, but they were significantly outpitched by the Rays. Tampa is a team short on household names and star power. Last season, outfielder Austin Meadows showed that he could be a perennial all-star, but this season has been a struggle. Randy Arozarena has blossomed this season and has a chance to be a big-time offensive star, but he is just a rookie. Otherwise, the Rays are a collection of slightly above-average players that, when linked together, create a strong unit. The Jays have more star power and potential impact position players than the Rays.

But the Rays are a better team because of the quality of their pitching. As Rays manager Kevin Cash said, he has a “whole damn stable of pitchers that throw 98 miles per hour,” in the bullpen. They also boast three high-quality aces in their rotation who can also throw from 96-100 mph.

There is more than one way to build a team. The Rays lead with run prevention behind their top-end pitching staff. They score just enough to win a lot of games because they don’t give up many runs.

The Jays have to rely upon their offence much more than they Rays because they are not as good at run prevention. The Jays’ pitching and defence are not at a championship level. Toronto beats themselves too much because of walks and errors. The Rays allowed 20 unearned runs this year, compared to 44 for the Jays. Toronto pitchers walked 250 batters this year, in comparison to only 168 by Tampa.

Good pitching and mediocre offence always win more games than good offence and mediocre pitching. The Rays are on the other side of the fence from where the Blue Jays are right now.

The New York Yankees are also evaluating themselves in comparison to the Rays.

Owner Hal Steinbrenner apologized for the team not advancing to the World Series but stopped short of saying that the season was a failure. His father, George, deemed every season that ended without a title a failure. It was an arrogant expectation. There are actually other good teams beyond the Yankees but The Boss, as George was known, would never accept defeat. It drove him and the people around him, but it also made his employees feel expendable and on edge.

Hal Steinbrenner is more realistic and runs the team much differently than his father. He operated the Yankees like a business with a budget. They spend a lot of money and still desperately want to win, but they don’t just throw money at their needs. General manager Brian Cashman seeks youth and experience while focusing on player development, supplementing it with free agents and trades.

The Yankees haven’t finished under .500 since 1992. That is success. Sure, you want to win championships, but you won’t win every year. Giving your team a chance to win year in and year out is all an owner can really desire. If a club keeps getting to the playoffs, sooner or later they will win.

The Yankees have a solid core of players in the prime of their careers. I expect they will re-sign second baseman DJ LeMahieu, fortify their bullpen and add to their starting rotation this off-season. They’ll be a strong World Series contender again next season.

- Reports out of Chicago are that the White Sox have been granted permission to speak with Los Angeles Angels special assistant and Hall of Famer Tony La Russa about their vacant managerial job. Indications are that it is the 76-year-old La Russa’s job if he wants it. The White Sox are a win-now team and La Russa is a win-now manager. The Hall of Fame skipper started his managing career with the White Sox, and it could bring closure for him and the organization as owner Jerry Reinsdorf always regretted firing La Russa in 1986. If La Russa doesn’t want the job, I predict former Astros manager A.J. Hinch will get it. Sox general manager Rick Hahn worked for former player agent Jeff Moorad while Moorad represented Hinch. Hinch has won a championship in Houston with a young roster like the one Chicago has built. He’s an obvious fit, other than that cheating scandal thing, which he will have to explain.

- Houston Astros manager Dusty Baker went old school in Game 4 of the ALCS. He visited the mound in the sixth inning as veteran starter Zack Greinke was in a real jam with runners on first and second and one out with Arozarena at the plate. He considered removing Greinke, but catcher Martin Maldonado talked him out of it. I’m sure the Astros analytic department broke their No. 2 pencils over their knees. But the 71-year old manager trusted the experience factor over the numbers that indicated that a power-armed slider pitcher was a better option. Greinke rewarded his manager for the vote of confidence by getting out of the inning unscathed. The Astros went on to win 4-3.

- Astros second baseman Jose Altuve had a couple of tough days, committing two throwing errors in Game 2 and one in Game 3. Those errors came at critical times as Houston lost the first three games of the ALCS. Altuve has been swinging the bat quite well but his throwing issues have been so damaging and out of character. He didn’t make a single throwing error all season, but it has gotten so bad that Baker was having to answer questions about whether Altuve had a case of the “yips.” It sure looked like it had become a mental issue that could overwhelm the veteran second baseman, but he bounced back in Games 4 and 5 and made all the throws he needed without a problem. It appears it was a momentary loss of confidence, but Altuve is possibly one bad throw away from it consuming him again. The Astros won Game 5 and are trying to become only the second team ever to overcome a 3-0 deficit in a seven-game postseason series. But remember: The ball has a way of finding vulnerable players in critical moments. We will see if Altuve is up for it.

- Los Angeles Dodgers starter Clayton Kershaw did it again. The future Hall of Famer was great for five innings, but things imploded in the sixth inning of Game 4 in the NLCS. Kershaw lost command of his curve ball the third time through the Atlanta lineup and the Braves hitters just teed off on his fastball. One day after the Dodgers set offensive records with 15 runs – including 11 in the first inning – they were held to just one run on one hit through six innings by Braves rookie starter Bryce Wilson. Wilson had thrown only 15.2 innings during the regular season and a total of 42.2 innings in his career. The Braves won Game 4 and now have a 3-1 lead in the series. Kershaw is 175-76 with a 2.43 ERA in the regular season in his career. In the postseason, he is now 11-12 with a 4.36 ERA.