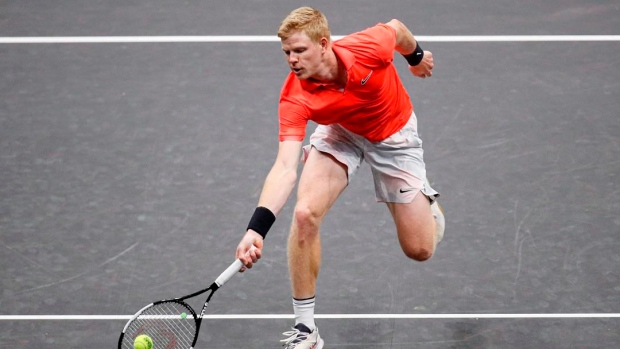 UNIONDALE, N.Y. — Kyle Edmund feels the strength back in his body, the kind a player needs for those moments when he has to dig his deepest.

And with his health returning, his game is looking good again, too.

Edmund powered into his first ATP final since 2018, beating Miomir Kecmanovic 6-1, 6-4 on Saturday at the New York Open.

A day after all four quarterfinals went three sets, Edmund made quick work of the first semifinal at the Nassau Veterans Memorial Coliseum. The No. 8 seed broke Kecmanovic’s serve on his first two attempts en route to a 5-0 lead in the first set, then won the final nine points after trailing 4-3 in the second.

“Just my resilience I think in the end proved a little too much,” Edmund said.

He will be looking for his second career title Sunday when he faces Andreas Seppi, who beat Jason Jung 6-3, 6-2 to move within a victory of his first title since 2012.

Edmund climbed as high as No. 14 in the rankings — ending Andy Murray’s lengthy reign as the top British player — in October 2018. He reached his lone Grand Slam semifinal earlier that year at the Australian Open and won his only title near the end of that season in Antwerp, Belgium.

But he battled a left knee injury in 2019 and tumbled more than 60 spots in the rankings within a year.

He looked healthy Saturday on the black courts, easily chasing down drop shots and moving all over the baseline to win the rallies from the back.

“It definitely helps when you have confidence in your body and you feel like you’re there, you’re ready to go,” Edmund said. “You feel like you’re able to give your best and obviously your performance physically improves as well.”

Edmund never let Kecmanovic, the No. 6 seed from Serbia, have a chance to get into the match. It was 2-0 within minutes after Edmund’s first break and he rarely let up the rest of the set.

Then after tying the second set at 4-4, Edmund broke the 20-year-old at love in the next game before serving three straight aces in the final game to quickly wrap it up.

Edmund said he began feeling better late last year, but that wasn't leading to victories then or at the start of this season. It's all coming together this week on Long Island.

“It’s nice to see it pay off, for sure,” Edmund said. “It’s a long year, the tennis year. Year after year you put in a lot of hard work, so when get results like this, it’s nice to see the rewards for sure.”

Jung eliminated Kevin Anderson and No. 3 seed Reilly Opelka, the tournament's past two champions, to make his first career semifinal after qualifying just to make the main draw. But his run ended against the steady Seppi, who has won three titles but had gone nearly four years without getting back to a final until falling last year in Sydney.

The 35-year-old Italian was nearly out of this tournament early, fighting off a match point in the first round to beat Damir Dzumhur in a third-set tiebreak. Now, after what he said was his best match of the week, he gets another chance to end his lengthy stretch without a title — one he acknowledged occasionally creeps into his mind when he gets close.

“Tomorrow is one more final, another chance," Seppi said, “and hopefully can play some good tennis again.” he said.