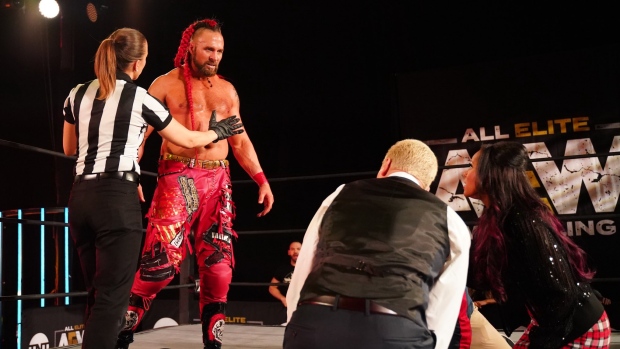 After a breakthrough 2019 that saw him star in New Japan Pro Wrestling’s G1 Climax, win the IWGP United States Championship and be named the Wrestling Observer’s Most Improved Wrestler of the year, the future is now for Lance Archer.

“The Murderhawk Monster” takes on Cody at All Elite Wrestling’s Double or Nothing on Saturday night to crown the promotion’s first-ever TNT Champion with the title being presented to the victor by Mike Tyson.

For the 43-year-old Archer, his rise to prominence last year resulted in a flurry of offers from different companies to acquire his services. Spending the majority of the past decade with NJPW on the traditional “freelancer” arrangement used with gaijin (foreign wrestlers), Archer was free to sign a long-term deal with a company and began to do his due diligence when it came to making a decision.

“There were so many good things when researching this and making this decision about AEW,” Archer told TSN.ca “I spoke to many friends who were already part of the company. And I spoke with them privately in the sense of ‘Tell me the truth – how is it there?’ and not one person came back with negative answers or words or thoughts or anything. It was always positive. It was always a great place to be. Everyone here is awesome from [AEW president] Tony [Khan] on down. It was just a great place and environment to be a part of.”

In late February, Archer put pen to paper on a contract with AEW, returning to a North American promotion for the first time in nearly 10 years, and jumping into the unknown.

“Change is always a big deal,” Archer said. “Change is scary. Change is hard. Change is one of those things that most people don’t even attempt to do because they don’t know what the future is going to be. To me, that was a part of the enticement – I don’t know what the future is going to be, but I like taking on that challenge. I’ve been in the business coming up on 20 years and for me, it was a do-or-die moment. That’s kinda how I’d seen all of 2019. Go out there, go balls to the wall and let everything fly and leave nothing on the table. This was another opportunity to do that and I have a very strong faith in God and I said a lot of prayers. Everything I was feeling, those prayers, talking to my family and friends, the challenges that were being presented in front of me, the attentiveness that AEW had shown me and desire to have me as part of the company – everything was leading me in a positive direction towards AEW. With all of the options I had on the table, there was just a checklist of pros that kept coming up for AEW. So it wasn’t one reason why I chose AEW, it was many.”

A former collegiate quarterback at (Southwest) Texas State, Archer first gained national fame with Total Nonstop Action (now Impact) Wrestling in 2004 under his real name, Lance Hoyt. He joined World Wrestling Entertainment in 2009 for a two-year run under the name Vance Archer. But it wasn’t until jumping to NJPW in 2011 as a member of the villainous Suzuki-gun stable that the Texas native took his work to the next level.

Alongside Calgary-born Davey Boy Smith Jr. as Killer Elite Squad (KES), Archer won the IWGP Tag Team Championship on three occasions, taking on the likes of Tencozy (Hiroshi Tenzan and Satoshi Kojima), Guerrillas of Destiny (Tama Tonga and Tanga Loa) and EVIL & SANADA over the years. With Smith’s departure from the company in 2019, Archer transitioned back into singles competition and returned to the G1 for the first time in five years where he was one of the breakout stars of the tournament, competing in well-received matches against Will Ospreay, Kota Ibushi and Kazuchika Okada. At King of Pro-Wrestling in October, Archer defeated Juice Robinson to win the IWGP U.S. Title for his first singles crown in Japan.

If you didn’t follow Archer to Japan and only remember his work in TNA and WWE, then the transformation into his AEW incarnation might be a little jarring.

“Donning the whole ‘Murderhawk Monster’ persona, which is a fun thing to say and if you’ve never heard it before, it sounds kind of silly, but it’s fun to figure out what a ‘Murderhawk’ is or what a ‘Murderhawk Monster’ is,” Archer said. “Some of the biggest differences just are my confidence, my ability to portray that monster with every ounce of confidence I have in myself and the way I can go out there with nuances and emotions I can show. The physical ability has always been there – God blessed me tremendously with that, thank goodness – and it’s just putting that all together in a package that is able to go out there and really capture people’s attention from the entrance.

“So if the last time you really saw me was as Vance Archer 10-plus years ago and you didn’t see any of me while I was in New Japan, it’s absolute night-and-day different from the hair to the gear to the attitude to the mentality to the actions. Every aspect you could possibly think of has completely changed in that 10-year period and the ‘Murderhawk Monster’ Lance Archer is absolutely nothing like Vance Archer.”

Archer credits his time in Japan with revitalizing his work and granting him the ability to take chances to become a better performer.

“Early out in my career in some of the companies [I worked for], I heard a lot of ‘No,’” Archer said. “I heard a lot of ‘Don’t do that’ or a lot of ‘Nah, pull back on that’ or ‘Less of that,’ blah, blah, blah. When I went to Japan, it was always ‘Great, but we want more. We want bigger. We want stronger. We want more monster,’ as I heard many times. So it allowed me to just kind of step up my game each and every time I went out to the ring. I was like ‘Okay, you want bigger, you want stronger, you want more monster? I’m going to give you bigger, stronger and more monster.’ So every time I’d go out there, I’d try something new. I’d do something different and basically push the boundaries to see what I could get away with. There was almost never a time where they went “Yeah, don’t do that.”’

Among those who helped Archer succeed in Japan was a man he considers to be more like family than a colleague at this point: the legendary Minoru Suzuki. Archer recalls getting Suzuki’s attention the first time they ever met, years before he even joined Suzuki-gun.

“I worked in Japan in 2007 with just a small, independent company called MAKEHEN,” Archer said. “Ultimately, that little company, MAKEHEN, became another company called Vader Time Wrestling and Vader [the late Leon White] was actually involved when he was still around. But my very first match ever on Japanese soil was a tag match against Suzuki. It was a crazy situation and I don’t remember who my partner was and I don’t remember who his partner was, but the one thing I remember specifically and I don’t remember anything else about the match – he was beating up my partner and had some crazy hold on him and obviously, I can’t just stand there and let him keep doing that to my partner, so I went in and gave him a big kick. And he completely no-sold it. He just kind of looked at me sharply with that crazy Minoru Suzuki look and I was just kinda standing there like ‘Yeah, stop that!’ and I just left the ring.”

Archer won the 2011 World Tag League with Suzuki and travelled with him over the years as a member of his stable. Archer says Suzuki went out of his way to always make sure he was looked after as a guest in his country.

“He was tremendously good to me both in the ring and outside of the ring,” Archer said of Suzuki. “Obviously, inside the ring, that personality and evilness he brings to his style – you know, he’s not a large man by stature, but he brings fight that’s bigger than just about anybody else’s you’d step in the ring with. And he treated me like a brother and family outside of the ring…He helped out tremendously in so many ways, beyond just being in the ring and learning to be a killer like him. He helped me with the culture and understanding how to just be a respectful human being, which he absolutely is. I see him now like a brother more than I see him as a mentor.”

Having worked with an icon like Suzuki in NJPW, Archer now finds himself alongside another one in AEW: Jake “The Snake” Roberts, with Roberts acting as his onscreen manager. Archer says both he and Roberts are enjoying the pairing.

“I’ve seen the good Jake and I’ve seen the bad Jake,” Archer said. “Right now, it’s a very, very good Jake. He’s in an amazingly good place right now. When Jake is good and sober and on his game, there’s nobody better…just the little nuances he’s able to help me with and his delivery of promos – his style and my style are completely different. Mine is much more chaotic and out of control, burst in the door and kick your teeth down your throat, while he’s very smooth and cunning. He’s that snake in the grass. I think that yin and yang – his presentation and my acting, so to speak – have been a lot of fun for both he and I. I think it’s surpassed people’s expectations, even including ours.”

After victories over Colt Cabana and Dustin Rhodes, Archer now heads into the finals of the TNT Championship tournament against Cody in one of the main-event matchups of Saturday’s PPV. The enormity of the moment is not lost on Archer.

“For my career, especially with the platform that I’m on right now with what AEW is doing for the business of professional wrestling, in essence, it’s the biggest match in my career because of that,” Archer said.

Archer believes that the situation he now finds himself in is further proof that he made the right decision in joining AEW.

“This is my biggest match, regardless of the situation that the world exists in right now,” Archer said. “With me and Cody fighting for the first ever TNT Championship and my first run in the company with a huge, bright future to come – this is a huge, huge deal for me. I’m excited for it. And again, talking about the decision as to why I went to AEW, this is one of those reasons why I came to AEW – for opportunities like this. It absolutely gets me excited and I hope the fans are, too.”