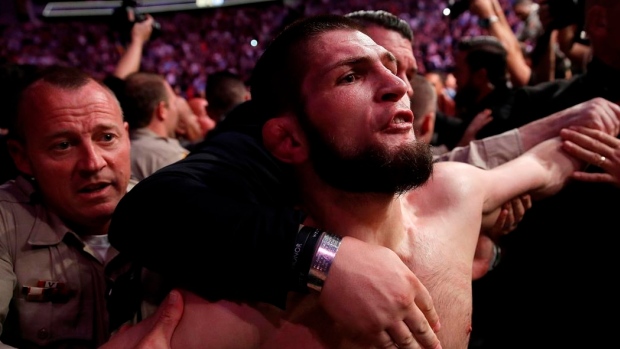 The last time Khabib Nurmagomedov was in an octagon, he didn't leave through the door.

He's hoping to make an exit more befitting a champion this weekend.

The UFC's lightweight pound-for-pound king hasn't fought in the 11 months since he punctuated his star-making victory over Conor McGregor at UFC 229 in Las Vegas by scaling the fence and jumping into the crowd to fight McGregor's entourage.

Nurmagomedov's reckless response to perceived disrespect earned him a suspension and a $500,000 fine, but it undeniably boosted the outlaw star status of the undefeated Dagestani grappler in a sport that loves a rebel. After nearly a year away from competition, Nurmagomedov (27-0) is eager to get back in the cage at UFC 242 to answer any lingering questions about his supremacy in mixed martial arts.

Unlike the theatrics around his bout last year with McGregor, Nurmagomedov has a clear mutual respect with Poirier. Instead of a clash of personalities, this fight will be a contrast of style and strengths.

"My last fight, it was a little bit crazy and tough fight," Nurmagomedov said. "But now I have an opponent I want to show respect to, and it's all about respect. That's why we both show respect. But when the cage closes, it's going to be a very good, high-level matchup."

The UFC's third-ever show in the United Arab Emirates, but its first since 2014, also includes lightweights Edson Barboza and Paul Felder, preceded by a bout between heavyweight contenders Curtis Blaydes and Dagestan's Shamil Abdurakhimov on the pay-per-view portion of the card.

The UFC is returning to Yas Island to showcase Nurmagomedov to audiences outside the promotion's North American wheelhouse — and also because Nurmagomedov has vowed never to fight in Vegas again after the fallout from his shenanigans.

Nurmagomedov trains in San Jose, California, alongside Daniel Cormier, Cain Velasquez and Luke Rockhold. He hasn't fought outside the U.S. since 2013, but the Russian citizen is eager to expand his reach.

"All the time when I fight in UFC, I didn't have almost 100% support in the stadium," Nurmagomedov said. "But (in Abu Dhabi), I think I'm going to feel this, because I feel this is my area. This is not Dustin Poirier's area. These people don't come to watch fight because of Dustin. These people come because of me. That's why I feel I'm going to have big, big support from my friends here in Middle East. A lot of people are going to come from USSR countries, Russia, from Dagestan, from the Arabic countries. A lot of people are going to come support me."

The matchup and location also appeals to Poirier, who overcame a loss to McGregor in 2014 and climbed past a slew of contenders to get this shot. Once a reckless brawler, Poirier has redefined his game and reached new levels of success by fighting more intelligently.

"It means everything to me," Poirier said. "How many times in our lives or in our careers do we have a chance to really do something great? These guys are building an arena for us to compete in. I'm travelling across the world in the biggest fight that I can get, and going out there to do something that's never been done. I have an opportunity for greatness, and I'm approaching it that way."

Nurmagomedov was confident he could beat McGregor, and he proved it with a one-sided submission victory. While Khabib is a significant betting favourite against Poirier, he is wary of the interim champ's impressive striking to go with a black belt in Brazilian jiu-jitsu.

But Nurmagomedov retains the confidence of a career without a defeat.

"When I watch Dustin Poirier, I think it's going to be my toughest challenge," Nurmagomedov said. "I always think like this. I don't want to make a mistake. I don't want to underestimate any guy."