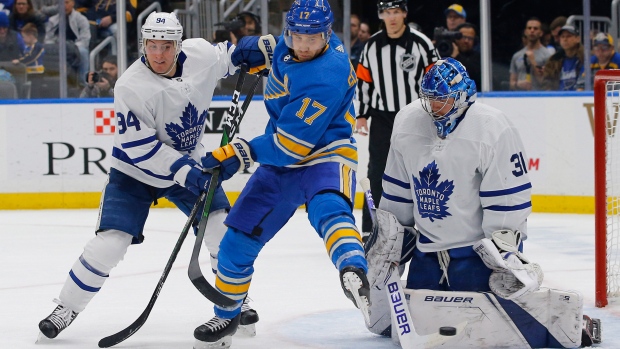 TSN Toronto reporter Kristen Shilton checks in daily with news and notes on the Maple Leafs, who held a 1 p.m. practice at Rogers Arena in Vancouver on Monday ahead of Tuesday night’s game against the Canucks.

When it comes to identifying what Morgan Rielly thinks he and new defensive partner Tyson Barrie can improve on, there’s really no need for specifics.

“[It's] everything,” Rielly said with a shrug after the Maple Leafs practice at Rogers Arena on Monday. “Defensive zone. Not letting them score.”

It’s that attention to detail in their own end that all of Toronto’s players have been focused on lately, and not necessarily something Rielly and Barrie have been most known for in their careers. Both are thought to be highly talented offensive defencemen, best served by lining up with a stay-at-home partner, but still Leafs head coach Sheldon Keefe made them the team’s top pairing.

“I'm not concerned about [them being a defensive liability],” Keefe said. “I think that both guys, with the way that they skate and just the way that we're trying to adjust our structure, we think it helps all of our players and insulates our defence a lot better. But also in pairing them with some of our better players, the hope is that the play is going to be in the other half of the ice. We know that it's not always going to be the case but we trust these guys, they're good players, they're reliable players in their own right and they recognize what we want to get done on both sides of the puck.”

For his part, Rielly joked that the “geographical chemistry” the two share has helped ease their transition to being partners. Like Rielly, Barrie hails from the Vancouver area, and so the blueliners have a history that precludes their time with the Leafs.

“It just makes it a bit easier to be open with one another and talk,” Rielly said. “We’ve got to keep working on a couple of things and we're pretty open with one another and we talk about how we can improve and things we want to do better. We’ve got a ways to go, but we're looking forward to the challenges that are coming. And we want to make it work. I think we've both said that, so we're going to keep talking and keep trying to improve.”

As for whether he’s ever played with anyone as offensively minded as Barrie, Rielly noted that, “well, [Jake Gardiner] was a gambler, so yeah” but insisted it’s been “fun” testing the waters with Barrie.

“You're just out there, you're feeling it. You play the game the way you always have,” Rielly said of balancing their skill sets. “You go when you can. When it's not there, you don't.”

Since Keefe coached his first game behind the Leafs’ bench on Nov. 21, he hasn’t shied away from leaning on his stars, and increasing their ice time compared to when Mike Babcock was calling the shots. In averages alone, Mitch Marner went from 19:40 TOI per game to 21:01 under Keefe, while Auston Matthews is averaging 20:10 per game compared to 19:44.

It’s not a huge bump overall, but when the Leafs need their best players on the ice, Keefe doesn’t let anything get in the way of putting them there.

“That is definitely my intention,” Keefe said of leaning on his top skaters. “I think some of the games where they've played a little bit less than I'd like [are] the games that have been in hand for us and we're using our bench more, but those are great players that we think have the ability to make a real difference for us. We want to play with the lead as much as we can, and we believe those guys give us the best chance of making that happen.”

While the Leafs employ a sports science department that’s designed to help the coach optimize player performance, Keefe doesn’t rely solely on that information to manage his bench.

“In the game I'm more just reacting to the feedback they're giving me, from the body language and what I can sense,” he said. “Sometimes I'll just ask them. We have the benefit of timeouts that help it and that's kind of where you see some of the spikes in the ice time is before and after those timeouts. The sport science guys are more keeping an eye on the bigger picture things, giving us a sense of what might be too much. We haven't reached that point yet so just keep it rolling.”

And lest anyone think Keefe is upping certain player’s ice time because Toronto’s currently still fighting for a playoff spot, he insists the precarious position in the standings has nothing to do with it.

“That's philosophy for me,” he said. “I just think we want to get ahead in games and want to set our team up for success, so getting those guys out is important for us. We trust our team and we trust our bench, but I think they all recognize the difference-makers and the fact they need to be out there so when they're fresh and they're ready and the game allows us to, we're going to get them on the ice as much as we can.”

Frederik Andersen is tied for the most wins by an NHL goalie (5) in the eight games since Keefe took over as the team’s coach, and believes this is about as strong as he can remember his game being.

“Probably yeah, I feel pretty good,” Andersen said. “A lot [has to do with] how the guys are playing in front of me; I think that helps me out. The way we aren’t as predictable as we can be in our own zone, and when we control the play more, their players are going to be more tired and won't have so much time in the offensive zone. And the more we play with the puck, the more tired they will be.”

But what’s helped Andersen to better numbers was part of a larger, longer process.

“I think some of the adjustments I've made was actually even before Sheldon got here,” he said. “I think just some things that I can control and how I work with my depth, it's been something I've worked on a lot this year and I thought that it's been working pretty well.”

Keefe’s focus on the defensive side of the puck has also aided Andersen, who’s noticed how the Leafs are picking up their play around him.

“We’ve been playing really good to tighten up some things in the defensive zone where we kind of give up different looks than before and that benefits me as well,” he said. “We’ve had a lot of talks about how to sustain pressure in the offensive zone too, so it's just all the different things in each phase. It's great to have everything go together and be more of a joint product.”

But all of that fell to pieces when the Leafs faced the Philadelphia Flyers last Tuesday, and Andersen was left out to dry in a 6-1 collapse. The goaltender responded by asking Keefe to let him start again the following night against Colorado, when Michael Hutchinson was scheduled between the pipes.

Keefe agreed to the change, and even though the Leafs lost that game 3-1, it showed Keefe a great deal about Andersen.

“Reliable is a good adjective to use in terms of the fact that he's very steady every day in his demeanor, how he prepares, his ability to make saves for us at key times,” Keefe said. “And you also see how he stepped up the way that he did when he wasn't happy with his performance or the team's performance in Philadelphia and wanted to play [again]. There are just a lot of really great qualities there that you love to have in a goaltender.”

To make up for the additional start, Keefe said he planned to put Hutchinson in at some point during the team’s current Western Canada swing, but that will depend on how well the Leafs play in their next couple games and if it allows for the backup to get in.

While it was difficult for Hutchinson to be denied a coveted start last week, he doesn’t deny that it was the best move for Toronto to have Andersen go in back-to-back.

“I really thought, when the starting goalie shows that kind of fight, that he really wanted that game, you know he's going to put in a really good performance,” Hutchinson said. “That's good for the guys, that's good for him. It's always tough when you lose out on a start, but Freddie's the guy here, he's feeling it, he wants it and you can't argue that.”

The Leafs are projected to have four players – Nic Petan, Alex Kerfoot, Barrie and Rielly – in Tuesday’s lineup against the Canucks who hail from the Vancouver area, a novelty that has somewhat worn off over the years for Rielly.

“It's nice,” he acknowledged. “We like coming home, but there's no question it's a business trip. I think when you're younger you appreciate it more and I think now it just becomes kind of an everyday experience, just another game for us, so it's important that we play well and we keep this road trip going.”

Rielly did squeeze in some down time though during Toronto’s off-day on Sunday, visiting his family and beloved dog Maggie. And Keefe especially knows how valuable that opportunity to see loved ones can be for guys stationed far away from their hometowns. In his playing days, Keefe relished the chance to get back to Toronto and suit up near his native Brampton, Ontario.

“I talked to each of them today,” Keefe said of the club's Vancouver contingent. “I know they were excited to spend some time at home yesterday with family and friends and it's always an exciting, exciting time. Definitely it's nice the schedule has worked out the way that it has for them to spend a little extra time here, it can give them a little boost and revive them a little bit in terms of the grind of the season that inevitably comes for everyone.”