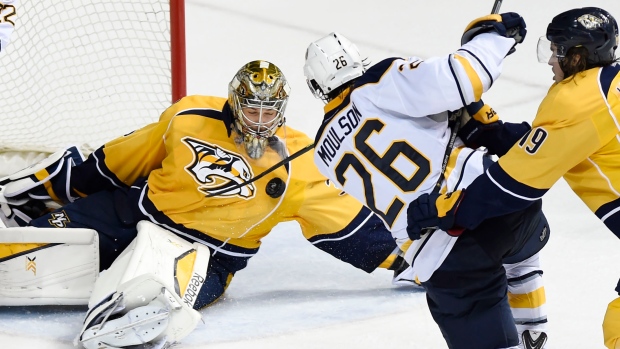 NASHVILLE, Tenn. - Pekka Rinne faced only a few tests from the Buffalo Sabres, and handled every one perfectly.

Rinne made 24 saves to lead the Nashville Predators to a 3-0 win over the Buffalo Sabres on Saturday night.

"I thought that we played really well," Rinne said. "We defended really well the whole 60 minutes. At the end they had a few chances, but other than that, I thought we did a really good job."

Taylor Beck, Craig Smith, and Mike Fisher scored for Nashville, which snapped a two-game losing streak. Rinne earned his third shutout of the season and 36th of his NHL career.

Matt Hackett made 40 saves for Buffalo, which has lost nine of 10.

Buffalo's Johan Larsson was whistled for a holding-the-stick penalty in the offensive zone. Matt Cullen won the ensuing faceoff back to Shea Weber at the right point, and he fired a slap shot. Beck skated through the slot and tipped the puck past Hackett for his second goal in three games.

Hackett had been stellar to that point, turning aside the first 26 shots he faced.

"I thought he was good. He gave us a chance," Buffalo coach Ted Nolan said. "It wasn't an easy game to play. They have some good shooters on the other team, so I thought he played really well."

In their previous two games, Nashville held third-period leads that slipped away. On Saturday, they added two goals in the final period to seal the victory.

Ryan Ellis drove down the right side and fired a slap shot from the top of the circle. Hackett made the stop, but the rebound came into the slot, where Smith scored his 23rd goal.

Ellis had a pair of assists.

"It was nice to see the change in the third period," Nashville coach Peter Laviolette said. "We were able to capitalize on a couple of the goals. That's something we haven't been able to do the last two games.

"It was nice to be able to get the second one and then the third one."

Rinne's best save came with 8:03 remaining when he denied Jerry D'Amigo on a breakaway.

D'Amigo missed the entire second period after taking a high stick from Smith to the face that drew blood late in the first. Smith was given a 4-minute penalty.

D'Amigo returned to the game in the third, wearing a full cage.

Rinne also denied Tyler Ennis on a late breakaway, and Cody Hodgson on a wrist shot from the left side.

"Rinne made some big saves," Ennis said. "I thought in the third period, we had probably five really good chances to score and couldn't put one by him. He played well."

Fisher scored at 15:01 of the third with a wrist shot from the high slot.

NOTES: Nashville C Paul Gaustad, formerly of the Sabres, won all 13 faceoffs he took. ... Cullen has four assists in his last four games. ... Nashville LW Viktor Arvidsson made his NHL debut. ... Buffalo is 1-9-1 against the Central Division. ... The Sabres have lost four consecutive games against Nashville. ... Buffalo is 4-12-1 in the second of back-to-back games.