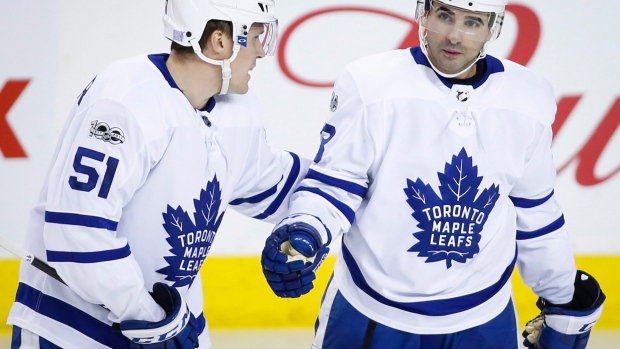 The cap is projected to rise to somewhere between $78 and $82 million for next season, up from $75 million this season.

After growing a combined $3.6 million over the last two seasons, the cap will climb at least $3 million next season thanks to a healthy 8 per cent increase in league revenue.

Bettman projected the NHL to hit a record $4.54 billion (U.S.) in league-wide hockey-related revenue. That figure does not include the $500 million expansion fee paid by the Vegas Golden Knights to join the league, but their addition as a 31st club was definitely a factor for the increase.

The NHL still lags well behind the other three major sports in North America in revenue. For perspective, in 2016 the NFL generated approximately $14 billion, MLB surpassed $10 billion for the first time and the NBA is north of $6 billion.

Nonetheless, next season’s salary cap will double the NHL’s original $39-million cap from 2005-06, when a hard cap system was put in place at the cost of a lost season.

The timing of this revenue influx, partially due to the addition of a 31st franchise, could not be better – for the Leafs and Oilers in particular.

“I think where we are with the cap going forward, with an increase, it’s certainly going to help us, and really continue along with the plan that Peter has for our team today and in the future,” Oilers president Bob Nicholson said.

The actual increase for next season – should revenue actually flow in at $4.54 billion – will depend on input from the NHLPA. The $82 million projection is based on the full 5 per cent inflator being used; $78 million is based on zero inflation, while $80 million would represent the mid-point at 2.5 per cent.

The NHLPA voted to increase the salary cap last season to $75 million using a 1.6 per cent inflator, which helped keep the escrow percentage withheld from player paycheques to 11.5 per cent this season, down from the 17 or 18 per cent of seasons prior.

“My preference is to keep the cap as low as possible because then the escrow is low,” Bettman said. “We’re projecting from our standpoint that the final escrow when it’s settled out and we disperse it will be a single-digit escrow from player salaries for last season. But again, the Players’ Association may have a contrary view and that’s probably not a discussion we’ll end up having until June.”

So, yes, this December projection at the board of governors meeting must be taken with a grain of salt. It is dependent on a lot of accounting, including the health of the Canadian dollar, and the NHLPA’s decision.

Yet, for the Maple Leafs, Oilers and a few other teams, it provides a roadmap to begin back-of-the-napkin budgeting. It also means that the Leafs may have to fork over a bigger chunk of change to the likes of Matthews.

McDavid’s eight-year, $100-million contract extension signed last summer chewed up 16.67 per cent of this season’s $75 million cap. If Matthews is seeking dollars equal to McDavid’s cut, that would put Matthews in the $13 million to $13.7 million stratosphere for next season.

But at least the Leafs and Oilers will have a little more breathing room to make it all work. Few teams are complaining about that.