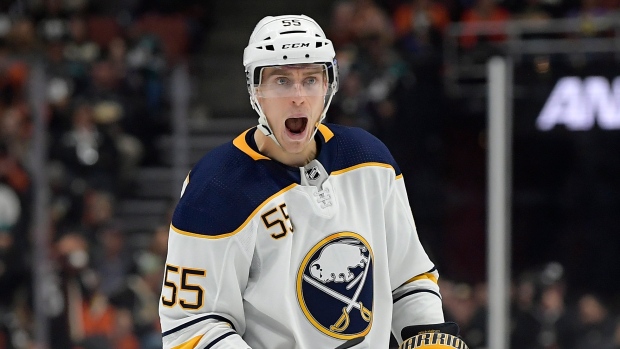 Have you ever listened to a general manager or head coach talk about a new player? What they get excited about varies greatly depending on position.

When teams talk about new forwards – perhaps they were recently drafted, traded for, or signed out of free agency – there is tremendous attention to their individual contributions. The commonly referenced measures are goals and assists. They are simplistic counting statistics, but they’re also repeatable and at least partially indicative of a player’s true scoring talent. There will always be focus on other measurables – skating ability and size, playmaking and vision, versatility when it comes to deployment on special teams, their presence in the locker room – but you rarely get through a single press conference without some sort of statistical argument.

It’s a different story for defencemen. Relative to forwards, there is a lot more focus on usage. There are two reasons for this. One, defencemen scoring rates are substantially lower than forwards and most of their scoring tends to be assist-driven. Two, there has always existed a historical dichotomy between expectations for forwards (they should be the ones scoring) and defenders (they should be the ones suppressing goals).

That line of thinking is starting to evolve, but there still exists considerable opportunity in player analysis for the defender class.

In the absence of a singularly clear measure that quickly speaks to a player’s talent, teams still tend to rest their laurels on usage – the argument being that if a coach played a defender a lot of minutes, those minutes were both justified and indicative of high performance. We know NHL head coaches are extremely capable, but we also know that head coaches – along with front offices, fans, media and just about everyone else in the hockey universe – have a difficult time understanding what makes a defender ‘good.’

That brings us to this past weekend. The Buffalo News did an excellent job summarizing the Rasmus Ristolainen saga, one with a fresh new twist – the implication that the long-time Sabres defenceman has either requested a trade, or is at least considering requesting one.

If we weighed ice time as a positive predictor variable of a player’s true talent, we would assume Ristolainen was quite the difference maker. But that has never been the case. Ristolainen, like many defenders before him, is another story in how failed internal player evaluations and a lack of credible depth created an issue that the Sabres couldn’t solve until it was too late.

Let’s talk performance for a moment. One of the things we do have a strong understanding of is how players influence the performance of their teammates. The more skilled the player, the more likely that player has tremendous impacts on his teammates’ shot volume, expected goal rates and actual scoring rates over a longer period of time. It’s obvious when you overlay Ristolainen’s impacts against any his usage peers, who have all consistently exhibited excellence on the ice: 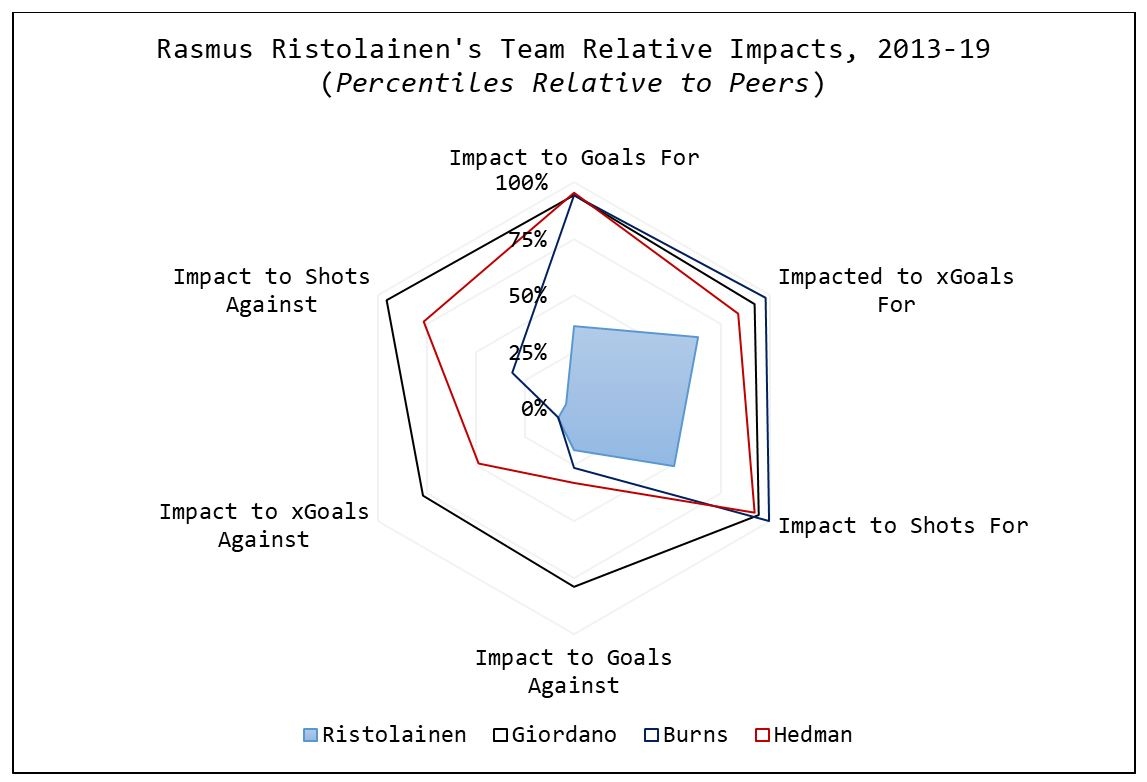 The point isn’t that Ristolainen isn’t better than Giordano, Burns or Hedman – I don’t think anyone would argue that point. The issue is really the gap in performance between the three. Giordano and Hedman, two of the best two-way defenders in the game, have tremendous influence on teammate play in all zones. Burns, a talented offensive defenceman, has elite offensive zone impact and middling defensive zone play.

Then you have Ristolainen. Ristolainen’s usage rates are just as laborious as those who won the Norris Trophy over the last three years, but the minutes he has given to Buffalo haven’t moved the needle in any discernible matter. He’s had a decent impact on his team’s offensive performance, but he’s given it all back and then some in the defensive third.

That data supports what we have seen from Ristolainen over the years. When he has the puck, he can make plays and facilitate offence. But when he doesn’t, things go south rather quickly for him and his linemates and they tend to spend far too much time treading water in front of their crease.

The other thing that’s worth mentioning here is that this data is aggregated, but even season-to-season analysis would have turned up some concerns early in his career. If we look at Ristolainen’s rate goals above replacement over the years and break it out by game state, we can see where he falters and where he shines: 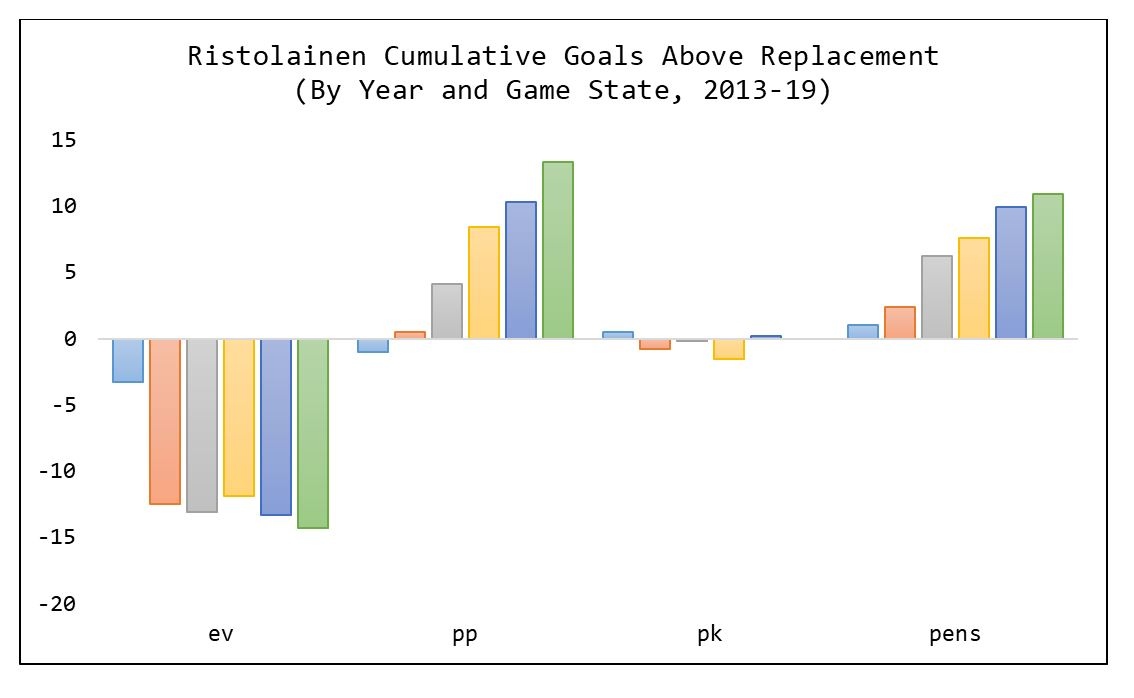 Ristolainen has been a consistently positive impact on the power play and has been much more disciplined than his defensive peers, which manifests in a favourable penalty differential.

The power play component is interesting to me – Ristolainen, at his best, is acting as a puck mover and distributor, capable of threading passes through tight windows and triggering Buffalo’s premium shooters from dangerous scoring areas. With less defensive pressure and more time to act as a creator and playmaker, Ristolainen shines.

But here is the problem: Ristolainen hasn’t shown that he can replicate that skill set at even strength. That’s critical, because 76 per cent of his shifts come when the game is even up. It’s here where Ristolainen’s struggles to handle forechecking speed and puck pressure manifest, and it’s why Buffalo seemingly spends endless amounts of time firefighting in front of their goaltenders when he is on the ice.

None of this is to say Ristolainen is a bad player. One of the prevailing sentiments around Buffalo is that Ristolainen would have been much better off with less usage and more insulated minutes. The Sabres haven’t been able to do that for years because of their inability – until recently, anyway – to find more talent to put on their defensive depth chart. That’s created a vicious cycle where Ristolainen has remained the best internal option to shoulder significant ice time, even if he never delivered in those moments.

I not only agree with that argument, I think it makes the case for why another team around the league should take a flier on Ristolainen if he’s truly available. A smarter team will find a way to make use of his skill set – one that’s more catered to a second-pairing role and some speciality work on the power play.

But this is the danger of not knowing what you have until it’s too late, or constantly betting blindly on future development. Far too often we see teams hold on to Ristolainen-types until it’s too late – wooed by their toolbox of skills, even if the performance has never been there. Teams that know early on exactly what they have on the blueline tend to do quite well on the trade front. (Remember this? And this?)

Sit on a player for too long, and you not only erode your own team’s performance, but you also fail to capitalize on any trade market that may have existed earlier.