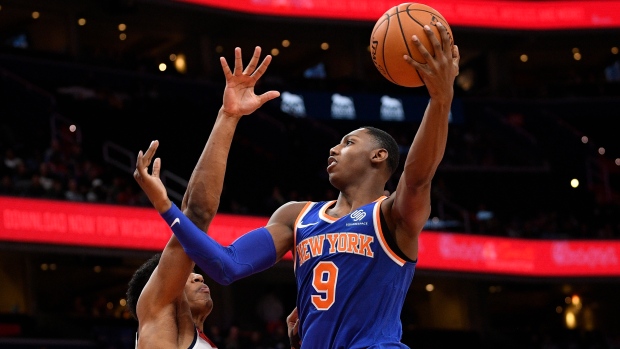 WASHINGTON - RJ Barrett and Marcus Morris each had 17 points and seven rebounds and Taj Gibson added 16 points and nine boards as the New York Knicks beat the Washington Wizards 104-99 on Monday night.

Barrett, the Canadian who was taken third overall by the Knicks in June, played 39 minutes in his first taste of NBA action.

Morris was ejected early in the third quarter for purposely hitting Washington's Justin Anderson on the head with the ball.

Moritz Wagner, acquired from Los Angeles in a three-team trade that sent Anthony Davis from New Orleans to the Lakers, led the Wizards with 16 points. Rui Hachimura, the No. 9 overall pick in June's draft, scored 12. Bradley Beal finished with five points on 2-of-10 shooting in 16 minutes.

Kevin Knox and Wayne Ellington added 12 points apiece for the Knicks and Julius Randle had 11 points, seven rebounds and seven assists. The 24-year-old Randle, who was the No. 7 overall pick in the 2014 draft, signed a 3-year, $63 million contract with New York in July.