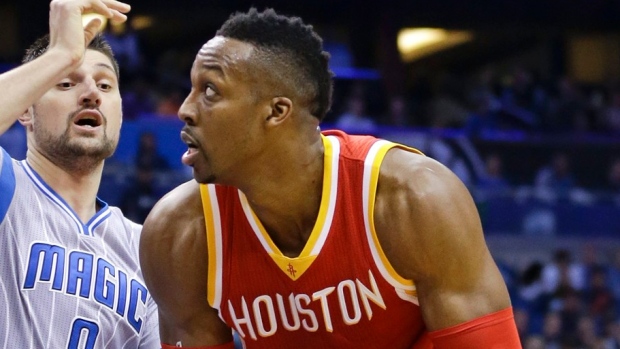 HOUSTON - Dwight Howard is feeling better and is close to returning from swelling in his right knee that has kept Houston's centre off the court from almost two months.

Howard, who has missed the past 23 games with the injury, returned to practice in the past week. He wouldn't give a timetable for his return, but said he's 'pretty close' to coming back.

"I had a good eight weeks of really training and working on my body and mentally I feel good, physically I feel great so I can't wait to get back on the floor," he said Wednesday.

Howard hasn't played since Jan. 23 and had a bone marrow aspirate injection in his knee on Feb. 9. Since then he's gone through a grueling rehabilitation process that has included spending an inordinate amount of time on the treadmill.

"We did some extremely tough workouts on the treadmill. Anytime anyone says treadmill I lose it," Howard joked. "I don't think anybody understands what they had me doing on the treadmill. I was just begging them: 'Can I just play so I don't have to do this?' Rehab is harder than the actual practice and all of that stuff."

He said his knee no longer hurts, but that it's been a little achy in the past few days as he's started doing more full-contact work on the court.

"They've been doing a lot of different things to get me in shape, to get me moving and running," he said. "Each day they've been building up the test to see how far my body can go without breaking down or swelling in my knee or pain."

Howard has played just 32 games this season after sitting out 11 games early in the season with a problem in the same knee. It's the most games Howard has missed in his 11-year career and it has been tough on the 29-year-old.

"My knee is something where I have to look out for the long run," Howard said. "It's not just about this season but the rest of my career. As much as I would love to play through all the injuries, I just have to realize that the most important thing is my health."

The Rockets have just 15 games left in the regular season, but Howard doesn't think it will take him many games to get back into the swing of things before the playoffs.

He expects to play about 20-25 minutes a game when he first gets back and will slowly increase his playing time. Houston has two back-to-back games remaining and Howard said whenever he does come back he will only play in one of the games when the team plays on consecutive nights.

The Rockets have gone 15-8 during this stretch without him and entered Wednesday's games in fourth place in the Western Conference. James Harden, who has led the team this season with Howard out, can't wait for the 6-foot-11 player to return.

Howard, who has averaged 16.3 points, 11 rebounds and 1.4 blocks a game this season, doesn't want to return until he's completely recovered and won't have any setbacks that could jeopardize playing in the post-season.

"I'll be back when I feel I'm in the best shape but also my body is healthy enough to play and maintain itself," he said. "I know a lot of people want me to play and I want to play as badly as anybody. But the most important thing is to make sure this doesn't happen again because we want to make a deep push in the playoffs this year and I can't afford to miss any playoff games."