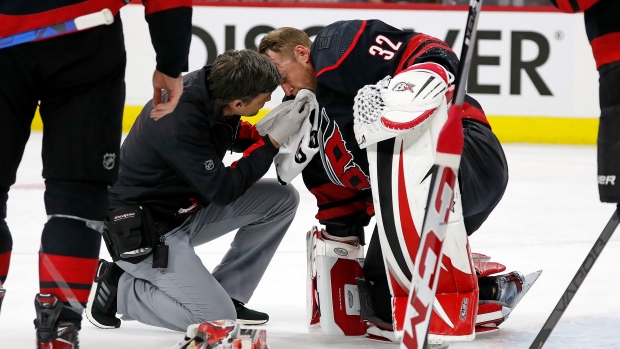 Carolina Hurricanes head coach Rod Brind'Amour isn't giving the Boston Bruins the benefit of the doubt when it comes to their play around his team's goaltenders.

Starting in place of the injured Frederik Andersen, Hurricanes goaltender Antti Raanta was forced to leave Wednesday's 5-2 Game 2 win in the first period after a collision with Bruins’ winger David Pastrnak. Pastrnak struck the Raanta in the head with a gloved hand as he tried to skate past him, leaving the Hurricanes goaltender bleeding from the mouth.

While Boston head coach Bruce Cassidy called it “a freak play,” Brind'Amour said he felt differently when asked whether he believed the Bruins were intentionally targeting his goaltenders.

"Well, what do you think? Can't get any more obvious,” Brind'Amour replied.

“His foot caught his pad, he's trying to block the clear but get out of the way,” Cassidy explained. “I don't think there was any intent there at all.”

Rookie Pyotr Kochetkov stepped in for Raanta, recording 30 saves on 32 shots in his playoff debut, which included a run-in with Brad Marchand in the second period.

With the Hurricanes leading 3-1, Marchand shoved Kochetkov from behind as he tried to play a puck. The goaltender responded with a jab of his stick, then his own shove as the play was whistled dead before Marchand fired back by swinging his stick and striking Kochetkov in the right arm. Both players received minor penalties for slashing on the play, with Martin Necas serving for Kochetkov.

The bad blood appears to be building between the two teams as the Hurricanes take a 2-0 lead to Boston, after a heated Game 2 that also included a hard hit by Carolina’s Andrei Svechnikov that forced Bruins defenceman Hampus Lindholm out of the game in the second period.

Svechnikov leveled Lindholm as he skated with the puck from behind the Boston net, leaving the Bruins defender struggling to keep his feet and as he was escorted to the locker room.

Cassidy said he thought Svechnikov's hit was “on time certainly but it looked high.” Brind'Amour pointed back to Pastrnak's hit on Raanta when asked about the collision.

“You never want to see guys get hurt,” Brind'Amour said. “I don't like seeing our goalie get taken out either. But one was legal, one was not, if you really want to break it down.”