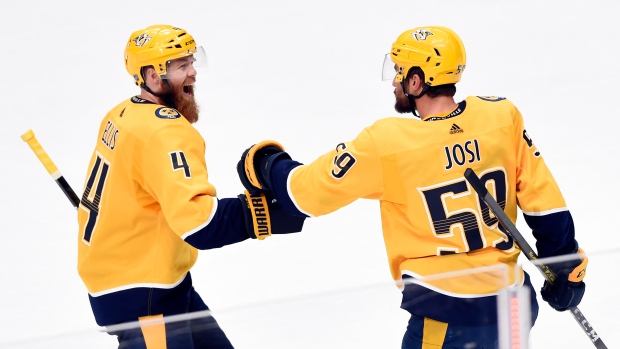 Nashville got plenty of scoring against Anaheim, more than needed with Pekka Rinne nearly flawless in goal.

Roman Josi and Viktor Arvidsson each had a goal and an assist to lead the Predators to a 6-1 victory over the Ducks on Tuesday night.

Colton Sissons, Rocco Grimaldi, Mattias Ekholm and Calle Jarnkrok also scored for Nashville, which snapped a two-game losing streak. Rinne made 26 saves to earn the victory and was sharp all night.

"It was nice to play with the lead," Nashville coach Peter Laviolette said. "We haven't been able to do that much this year."

Ryan Getzlaf had the lone goal for Anaheim, losers of two straight. John Gibson started and gave up four goals on 19 shots through two periods before being replaced by Ryan Miller, who finished with nine saves.

Rinne denied Ondrej Kase on a breakaway with 2:47 remaining in the first with a glove save. Then at 3:15 of the second, he stopped a penalty shot by Troy Terry.

Josi scored the game's first goal at 11:23 of the opening period. With Nashville on a 5-on-3 power play, Josi beat Gibson with a wrist shot from the high slot.

Just seconds after serving a slashing penalty, Sissons chased down a puck at the Anaheim blue line and beat Gibson with a wrist shot from the right faceoff dot high to the far side.

"After that second one, that was a gift," Anaheim coach Dallas Eakins said. "The one thing you can't do in this league is gift goals because they're damn hard to score."

Grimaldi, an Anaheim native, scored his first of the season at 35 seconds of the second period when he redirected a shot off of the stick of Nick Bonino.

Ekholm converted on a short-handed breakaway at 10:08 of the second.

"Believe it or not, there was some good, but there were a few too many silly mistakes, a few too many easy goals," Anaheim defenceman Cam Fowler said. "They capitalized on their power plays and we didn't, so I'd be surprised if we dwell on it too much. We've got to get ready for the next one."

Getzlaf ended Rinne's shutout bid at 3:59 of the third, but Arvidsson answered right back 31 seconds later.

Jarnkrok concluded the game's scoring at 8:19 of the third.

NOTES: Nashville LW Filip Forsberg missed his third straight game with a lower-body injury. ... Predators D Ryan Ellis extended his assist streak to five consecutive games. He has nine helpers over that stretch. ... Getzlaf has 45 points (15 goals, 30 assists) in 41 career regular season games played against Nashville. ... The Ducks were 0 for 3 on the power play and are now 1 for 25 on the season.

Ducks: At Dallas on Thursday night.