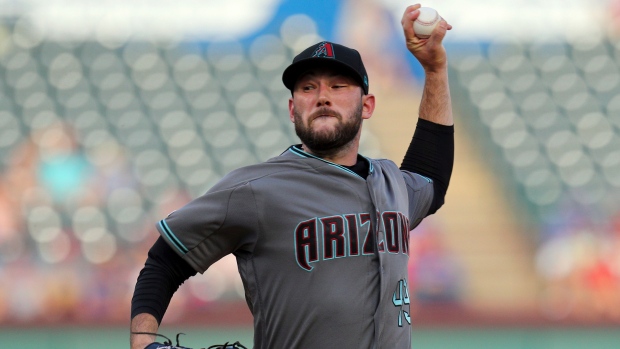 The 25-year-old left-hander allowed one run in 5 1/3 innings to help the Diamondbacks beat the Texas Rangers 9-2. Young (3-0) pitched collegiately about 20 miles from Globe Life Park for TCU in Fort Worth and now lives in nearby Dallas.

Young allowed three hits and one walk to defeat Lance Lynn (12-5), who went into the game with an 8-0 home record this season and led the majors in wins. Young struck out four and was lifted following 79 pitches, the most in his three starts for the Diamondbacks, who have won five of their last seven games.

"It was awesome," said Young, who was 17-10 during three seasons with the Horned Frogs. "I guess just a little butterflies just having some friends and family here and pitching in this stadium before and being close to TCU and close to home, but I was excited to get here."

Diamondbacks manager Torey Lovullo said he wasn't concerned that Young might be too amped up.

"I felt like he could manage his emotions," Lovullo said. "I knew he was going to come into this environment and pitch well."

Ketel Marte's two-run single with the bases loaded in the fifth inning broke a 1-1 tie. Ildemaro Vargas added a two-run home run in the sixth on his 28th birthday, and the Diamondbacks scored four times in the ninth inning aided by two errors.

Young had a scoreless streak that began during his major league debut on June 27 end at 13 innings in the fourth inning on a two-out home run by Joey Gallo. Young also had a hitless streak dating back to that same game end at 9 2/3 innings on a one-out single by Danny Santana in the second inning.

Five Diamondbacks relievers limited the Rangers, who have lost nine of their last 13 games, to one run and two hits over 3 2/3 innings. Texas is 14-18 against left-handed starters and 36-27 vs. righties. Lovullo said he arranged his rotation to have Young and fellow lefty Robbie Ray face the Rangers in this two-game inter-league series.

"We've addressed it all, and I think that we got to do a better job," Rangers manager Chris Woodward said of his batters' struggles against lefties.

Lynn trailed 1-0 with runners on second and third four batters into the game before he struck out the next two hitters to end the inning. That started a run of 12 straight batters retired before Vargas began the Diamondbacks' fifth inning rally with a one-out single.

Lynn gave up five runs on eight hits and one walk, striking out six.

"Today was bad all around," he said.

Hunter Pence went 0 for 4 as the designated hitter in his return to Texas' lineup for the first time since June 16, sidelined by a groin strain that also kept him out of last week's All-Star Game after being voted the American League's starting DH. With runners on first and second in the eighth after Texas scored its second run, Pence lined into a double play to first baseman Jake Lamb.

To make room on the roster for Pence, the Rangers optioned OF Willie Calhoun to Triple-A Nashville. Calhoun said before the game he was speechless regarding the move.

"I helped the team win," he said. "I don't know what else I would have done."

Calhoun, who was Texas' primary acquisition in the 2017 deadline trade that sent pitcher Yu Darvish to the Los Angeles Dodgers, hit .277 in 26 games with five home runs and 13 RBI.

Rangers LHP Jesse Biddle was placed on the 10-day injured list retroactive to Monday with shoulder fatigue. Texas selected the contract of RHP Taylor Guerrieri from Nashville to replace Biddle. Guerrieri allowed four runs and two hits in 1/3 inning in the ninth.

Rangers RHP Jesse Chavez (3-4, 3.84) will make his fifth start as a member of the rotation in the series finale against Ray (7-6, 3.81) on Wednesday. Ray held opponents to a .100 batting average with 16 strikeouts in winning his last two starts.