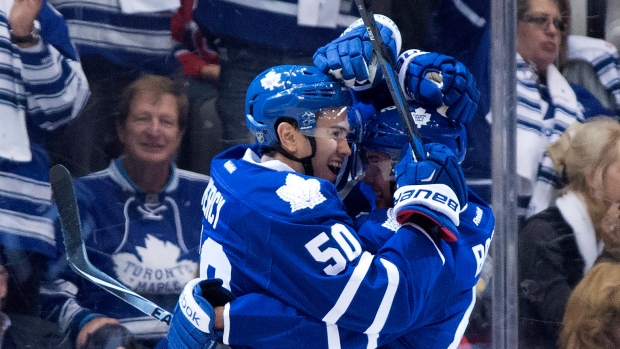 With 43 seconds remaining in the third, Tomas Plekanec put a bouncing puck towards the Leafs net, which re-directed off of Percy's skate and past goaltender Jonathan Bernier for the game winner.

Following the loss, Percy could only focus on the miscue in the dying seconds.

"Disbelief, disappointment," said a dejected Percy. "I don't know, it's just tough. Tough letting the guys down tonight, tough to start with a loss.

Percy admitted his teammates tried to tell him to forget about the play afterwards.

"I told him it's a bad bounce," said captain Dion Phaneuf. "That's the bottom line, he's got nothing to hold his head down (about). It hits his skate, it's a shot from the corner, that's bad luck."

Added Bernier, "Obviously he's a great player. He's very composed out there for a young kid. Just tough luck there. The guy threw it from the corner and it hit his skate, I don't think he saw it either.

"Obviously it's not his fault and I kind of gave him a little tap on the back."

The 21-year-old, who is in just his second season as a professional after spending last year with the American Hockey League's Toronto Marlies, played with the confidence of a veteran Wednesday night moving the puck with ease and skating it out of harms way. He was rewarded with power play time for his solid debut.

Percy finished the night second among Leafs defenceman, behind only Phaneuf, with 20:21 of time on ice.

"I thought he played a fairly strong game for us," said Carlyle. "He moved the puck effectively, he's very, very calm with the puck. The pace of the game was a lot different than what he saw in exhibition."

Percy setup Tyler Bozak at 19:22 of the first period, on a power play, feeding the Leafs centre out of the corner to give Toronto a 2-1 lead after 20 minutes.

"Just tried to get some speed through the neutral zone there on the power play, tried to take it out wide to (James van Riemsdyk)," said Percy of the play. "I missed him and just luckily went down in the corner and made a quick move towards the net and saw (Bozak) was open."

Percy's assist along with fellow rookie Brandon Kozun's helper on the first goal landed the pair in the record books. According to the Elias Sports Bureau, they're the first pair of Leafs rookies with a point in a season opener since Vincent Damphousse and Jeff Jackson scored in the season opener in 1986.

"I thought both guys played extremely well for us. They carried over how they played in the pre-season and they did not look out of place one bit," said Phaneuf. "They raised their game to the speed of it and compete of it and I thought both those guys were really good for us."

With injured Leafs defenceman Cody Franson (knee) targeting a Saturday return to the lineup, when Toronto hosts the Pittsburgh Penguins, coach Carlyle could have a tough decision on his hands.

Franson admitted Wednesday morning that the swelling in his left knee hasn't subsided. Franson's injury coupled with Percy's play could mean a second game for the Oakville, Ont. native.