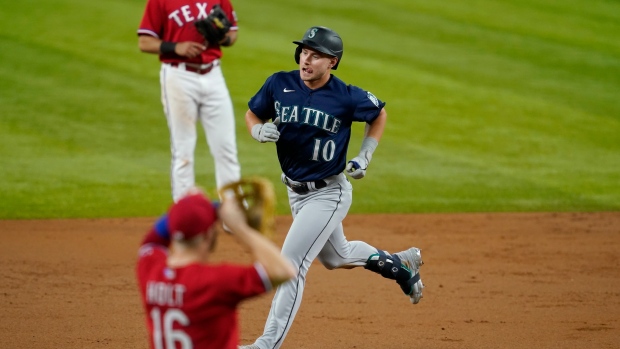 Gilbert (5-2), Seattle’s first-round draft pick in 2018, allowed four runs in 5 2/3 innings on six hits. He struck out six and walked one before Rangers rookies Adolis Garcia and Jonah Heim hit solo homers in the sixth to chase him. Seattle has won the last 11 games started by Gilbert.

“It wasn’t one of my best outings by any means,” Gilbert said. “But when the offense shows up like that, the defense making good plays behind me, everything came together.”

The Mariners have won five of their last seven games. They began their 10-game road trip 2 1/2 games behind Oakland for the American League’s second wild-card spot.

Kelenic pulled a 2-1 cutter deep to right field in the third inning off Kolby Allard (2-9), after Luis Torrens doubled to the left-center gap and Abraham Toro beat out an infield hit. It was the first homer for the highly touted 22-year-old Kelenic since getting recalled from Triple-A Tacoma on July 16. He was the centerpiece in the December 2018 trade that sent Robinson Cano and Edwin Diaz from Seattle to the New York Mets.

Kelenic, who got his career-high fourth RBI with a fielder’s choice in the ninth.

Allard, who came to Texas from Atlanta at the trade deadline two years ago, allowed seven runs (six earned) in three innings. He is 1-9 since entering the starting rotation on May 27, and has lost his last seven starts.

“The one thing that gets him in trouble consistently is not being able to stop the big inning,” Rangers manager Chris Woodward said. “It’s one of those things where he’s got to figure it out, whether that’s mental or physical.”

The Mariners went ahead 4-0 in the second inning on two hits, two walks and a throw home by shortstop Isiah Kiner-Falefa that went wide to the backstop.

“Certainly, we relied on Hector to play a number of roles,” Mariners manager Scott Servais said. “We’re going to have to lean on our starting pitching to go deeper because we really don’t have a long man. Hector did a nice job when he was with us, but he’s no longer with us, so we’ll adjust.”

Rangers: Selected the contracts of RHPs Drew Anderson and Jharel Cotton from Triple-A Round Rock. Cotton pitched two innings. … Reinstated RHP Josh Sborz from the paternity list, and he pitched two-thirds of an inning. … Outrighted C John Hicks to Round Rock.

Neither Abraham Toro nor Kyle Seager homered for Seattle. Toro, who had three hits, had homered in his previous four games — two for the Mariners after going deep in each of his last two games the Houston Astros before getting traded Wednesday. Seager had homered in three straight. … Garcia, now Texas’ home-run leader with Gallo gone, is seven short of the club rookie record. … It was Cotton’s first relief appearance in the majors after starting 29 games for Oakland from 2016-17.

Mariners: LHP Tyler Anderson (5-8, 4.38 ERA) will make his Mariners debut after being acquired Wednesday from Pittsburgh. Anderson led the last-place Pirates in wins and ERA.

Rangers: After Gibson’s departure, LHP Taylor Heard (2-3, 4.41) will make his third start of the season and 32nd appearance. He was on a limited pitch count in his previous spot starts.