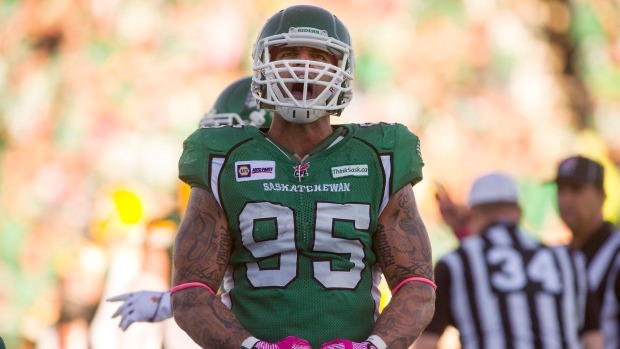 REGINA - After winning a third Grey Cup ring last year, Ricky Foley seriously contemplated retirement. Instead, the 32-year-old Saskatchewan Roughriders defensive end returned to the field in 2014 and had one of the best seasons of his career.

This time, he knew right away he wanted to come back.

On Thursday, the Riders signed Foley to a contract extension. With last week's re-signing of Tearrius George and John Chick being under contract, Saskatchewan has solidified its defensive line heading into the 2015 campaign.

The Riders posted a CFL-high 61 sacks this past season.

Foley said he knew "about 15 minutes" after Saskatchewan fell 18-10 to Edmonton in the West Division semifinal that he wanted to return rather than retire or become a free agent Feb. 10.

"I think collectively as soon as the season was done and we realized we were going home ... the somberness turned to almost anger, like 'Man, we could have won, we should have won, this sucks. OK we're coming back next year,' " Foley said during a news conference. "I know me and T-George, we had a moment where we knew we would be better next year, and we were going to come back and do this."

Foley, Chick and George are veteran players in their early 30s but each is still playing at a high level. Chick had a CFL-best 15 sacks, three more than George.

Foley, a six-foot-three 245-pound native of Courtice, Ont., matched a career high last season with 12 sacks while adding 54 defensive tackles. He was named the Riders' most outstanding Canadian for the 2014 campaign but believes he can do better.

"We still finished with good numbers, but we're still excited by what we're capable of."

Saskatchewan GM Brendan Taman said Foley's extension has been in the works for some time but the team needed to clear some logistical hurdles before making it official.

"He's a good Canadian and you want those guys around," Taman said. "He really had a good year for us, and we've pretty much solidified our D-line now."

Taman said there is still work to do on the defence. Saskatchewan needs a new defensive co-ordinator to replace Richie Hall and faces the task of re-signing hard-hitting safety Tyron Brackenridge.

Foley captured his first Grey Cup title in '06 with B.C. before winning in '12 with Toronto.

He said while the Roughriders might have trouble getting free agents due to perceptions of the climate, it's tough for a player to leave Saskatchewan after suiting up there.

"The fan support here on game day is amazing," he said. "You can't get that anywhere else."