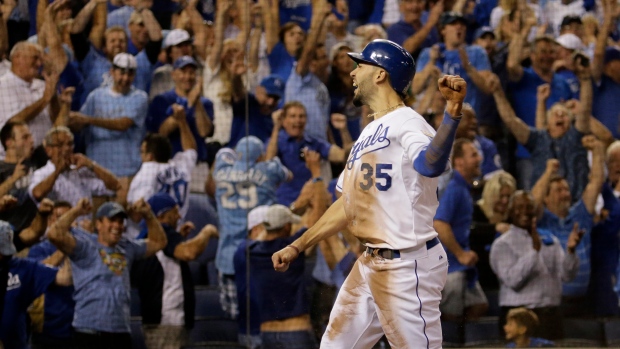 KANSAS CITY, Mo. - Rain had started to fall at Kauffman Stadium as the echoing roars finally faded into the night. Eric Hosmer popped out of the dugout one last time, looked to the sky and let it soak in.

It had been 29 years since the Royals played a post-season game — three decades spent mostly as a laughingstock. But on Tuesday night, already drenched in victory champagne, the young first baseman felt as if the whole world had watched their coming-out party.

"This team showed a lot of character tonight," Hosmer said. "We weren't going to quit."

Quite a start to October baseball — even if this one appeared to be over with plenty of time to spare in September. But in a back-and-forth epic that lasted 4 hours, 45 minutes, the A's lost their seventh straight winner-take-all playoff game since 2000.

It was the final collapse in a season that looked so promising this summer.

Making their first post-season appearance since winning the 1985 World Series, the Royals are sticking around. They'll open their best-of-five Division Series on the road Thursday night against the AL West champion Los Angeles Angels.

After falling behind by four runs, the Royals raced back with their speed on the bases — they led the majors with 153 steals this season. Kansas City swiped seven in this one to tie a post-season record previously shared by the 1907 Chicago Cubs and 1975 Cincinnati Reds, according to STATS.

The biggest one came in the 12th.

Hosmer scored the tying run on a high chopper to third by rookie Christian Colon, who reached safely on the infield single and then stole second with two outs.

Perez, who was 0 for 5 after squandering two late chances to drive in key runs, reached out and pulled a hard one-hopper past diving third baseman Josh Donaldson. Colon scored easily, and the Royals rushed out of the dugout for a mad celebration.

Sitting upstairs in a suite, Royals Hall of Famer George Brett put his hands on his head in near disbelief at the frenzied and jubilant scene that was unfolding below.

"It was unbelievable," Perez said.

The A's raced out to a 7-3 lead by the sixth inning, but the Royals countered with three runs in the eighth. Nori Aoki's sacrifice fly off Sean Doolittle in the ninth forced extra innings.

Kansas City squandered chances in the next couple of innings, as midnight came and went on the East Coast and the tension continued to build. Rookie left-hander Brandon Finnegan, just drafted in June, pitched two scoreless innings but walked Josh Reddick to start in the 12th.

Pinch-hitter Alberto Callaspo delivered an RBI single off Jason Frasor to put the A's ahead 8-7, but Hosmer hit a drive high off the left-centre wall against Dan Otero for a leadoff triple in the bottom half, and Colon drove him in with a bouncer that barely travelled 50 feet.

That set the stage for Perez, who lined a pitch from Jason Hammel down the third-base line.

"They finally got ahead there in the 30th inning or whatever it was," said Brandon Moss, who drove in five runs with two homers for Oakland. "That was definitely the best baseball game I've ever been a part of."

The long-suffering Royals hadn't played in the post-season since beating St. Louis in the 1985 World Series, and the excitement the permeated the city might best be summed up by a statement posted by the Kansas City Police on Twitter in about the 10th inning: "We really need everyone to not commit crimes and drive safely right now. We'd like to hear the Royals clinch."

For the A's, it was a stunning and heartbreaking finish. They had the best record in baseball before wilting in the second half, and needed a victory on the final day of the regular season just to squeeze into the playoffs.

Oakland had chances to put all that in the past. Instead, the season ended abruptly for a team that has failed over and over again in the post-season.

"It's kind of a microcosm of the year that we had," Doolittle said.

A much-anticipated pitching showdown between Oakland ace Jon Lester and Kansas City counterpart James Shields instead turned into a high-scoring game and a battle of attrition between bullpens.

"It was absolutely epic," Shields said. "You don't write a story like that."

Doolittle tried to save it for Oakland in the ninth, but he gave up a bloop single to pinch-hitter Josh Willingham. Pinch-runner Jarrod Dyson was sacrificed to second and then brashly stole third, allowing him to score on Aoki's deep fly to right field.

It was the third time in the last three seasons that Doolittle has blown a post-season save.

"That's the most incredible game I've ever been a part of," Royals manager Ned Yost said. "Our guys never quit. We fell behind there in the fifth inning, sixth inning. They kept battling back. They weren't going to be denied. It was just a great game."

Yost has refused to discuss who he might pitch in the opener against the Angels. The two best bets are vastly different options: Danny Duffy is a young, hard-throwing lefty who plays on passion, Jeremy Guthrie is a cerebral right-hander who relies on guile.

Oakland C Geovany Soto left the game after hurting his left thumb tagging Hosmer at the plate to end the first inning.

The A's haven't won a playoff series since sweeping Minnesota in the 2006 ALDS. "We've had our ups and downs," catcher Derek Norris said, "especially in the playoffs."