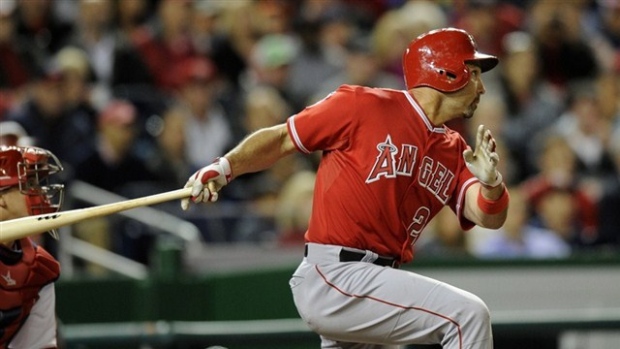 Minneapolis, MN (SportsNetwork.com) - The Kansas City Royals signed outfielder Raul Ibanez on Monday, just over a week after the 19-year veteran was released by the Los Angeles Angels of Anaheim.

Ibanez's addition was among several moves made by the Royals prior to Monday's game in Minnesota, with the club also recalling 2010 first-round pick Christian Colon from Triple-A Omaha and designating outfielder Justin Maxwell and utilityman Pedro Ciriaco for assignment.

The Angels released Ibanez on June 21 after the 42-year-old hit a meager .157 with three home runs and 21 RBI in 57 games. The well-traveled slugger belted 29 homers in just 124 games for Seattle the previous season, the second- highest total of his lengthy career.

Ibanez will be making a second tour of duty with Kansas City, having previously played for the Royals from 2001-03.

Colon, the fourth overall pick of the 2010 MLB First-Year Player Draft, was hitting .296 with four homers and 37 RBI while playing all over the infield at Omaha.

Maxwell has gone just 6-for-40 at the plate at the major league level this season, striking out in half of those at-bats. Ciriaco hit .213 in 25 games with the Royals.