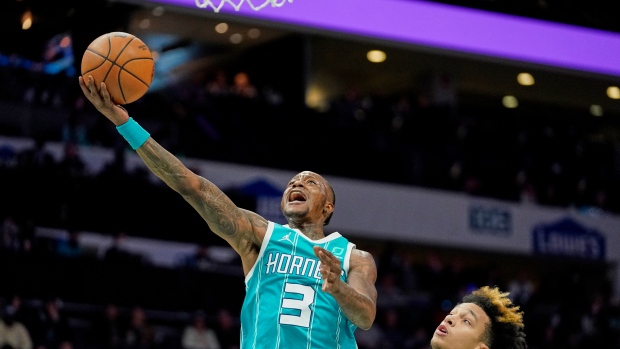 P.J. Washington scored 20 and Gordon Hayward 16 for Charlotte, which has won seven of eight. LaMelo Ball finished with 10 points for the Hornets.

Shai Gilgeous-Alexander led the Thunder with 29 points, but was held to four in the second half. Josh Giddey added 21 and Jeremiah Robinson-Earl notched a double-double with 12 points and 11 rebounds.

After Oklahoma City cut Charlotte's lead to 82-73 on Robinson-Earl's 3-pointer with 4:06 to play in the third, Charlotte pushed its lead to a game-high 25 on a 3-pointer by Bridges.

Charlotte’s only loss in the past eight games has been to Orlando, last in the Eastern Conference. Facing another team out of playoff contention, the Hornets trailed 2-0 but didn’t relinquish the lead after taking it back early.

Charlotte pushed its lead to 46-27 on Washington's 3-pointer midway through the second period. The Hornets maintained a lead around 20 points despite Ball picking up his third foul with 5:47 to play in the first half.

Charlotte led throughout the first period, with Oklahoma City coming within one at 13-12 on Giddey's basket. But the Hornets closed the period on a 24-8 run to take a 37-20 lead.

Thunder: Gilgeous-Alexander entered Friday with 30 points or more in three of his past five games. He missed that mark by one point. ... Oklahoma City has lost 11 of 13, but those wins were against playoff contenders Brooklyn and New York. ... Center Derrick Favors sat out with a back injury.

Hornets: Forward Jalen McDaniels left with 6:01 left in the first half with an apparent leg injury. He was helped to the locker room and did not return. ... Ball nearly notched a triple-double, but came up short with nine rebounds and eight assists.

Thunder: at Cavaliers on Saturday.