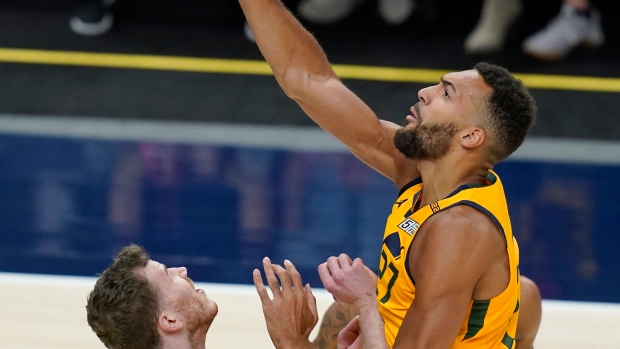 SALT LAKE CITY — Facing one of the league’s best mid-range shooting teams, the Utah Jazz successfully denied the San Antonio Spurs chances to create shots anywhere except the mid-range for the better part of four quarters.

Utah beat San Antonio 110-99 on Monday night, in large part, by denying the Spurs scoring opportunities at the rim and on the perimeter. San Antonio did not make its first layup until the final minute of the second quarter and the Spurs missed all seven 3-pointers they attempted before halftime.

“We tried to make them earn everything they got,” centre Rudy Gobert said.

Gobert tallied 24 points and 15 rebounds while keying the defensive effort that helped Utah lead wire-to-wire. The Jazz earned their second straight victory with efficient offence and tough defence. Utah scored 22 points off 13 San Antonio turnovers and shot 50% from the field.

“It’s really important to us to get off to a good start,” Jazz coach Quin Snyder said. “If it means making plays off our defence and getting easy opportunities, that’s even better.”

“We got to figure out a way to come Wednesday ready to compete, because that second half we competed really well with them,” said guard Dejounte Murray, who finished with 15 points. “I think we competed way more than we did in the first half — starting with myself.”

The Jazz scored on five straight possessions to carve out a 26-16 lead late in the first quarter. Clarkson and Bogdanovic each made back-to-back baskets to help Utah build a double-digit cushion.

San Antonio cut the deficit to 40-35 on a jumper from Gay in the second quarter. That’s as close as the Spurs got before Utah heated up again. The Jazz scored on six consecutive possessions to ignite a 17-4 run. Bogdanovic scored back-to-back baskets to start the run and punctuated it with a 3-pointer that gave Utah a 57-39 lead.

“When we play that way it’s really hard for the other team to play us because we have so many weapons,” Gobert said.

“Poor first half, really good second half,” Spurs coach Gregg Popovich said. “We’ve kind of had that personality for a lot of the year.”

Utah and San Antonio will face off again on Wednesday.

Spurs: Devin Vassell scored San Antonio’s first 3-pointer of the game with 7:07 left in the third quarter. … The Spurs attempted only 10 free throws but finished 10-of-10 from the free-throw line.

Jazz: Bogdanovic led Utah in scoring for the fourth straight game. … Trent Forrest finished with career-highs in points (9) and rebounds (4). … The Jazz outscored San Antonio 66-46 in the paint and 14-4 in fast-break points.

More fans are watching Jazz games in person in May.

The team expanded attendance to allow 6,700 fans for all home games starting with Saturday’s 106-102 win over Toronto. That is 1/3 of regular arena capacity and is the highest number of fans any NBA team has allowed in their home arena this season.

This attendance expansion includes courtside seating for the first time. Fans who want to purchase courtside seats must show proof of being fully vaccinated, along with a negative COVID-19 test result.

Utah capped attendance at 5,000 fans before making the change at the end of April.

“If we’re undefeated, let’s save those jerseys for the playoffs.” – Bogdanovic after learning the Jazz are now 9-0 this season in the yellow jerseys they wore against the Spurs on Monday night.