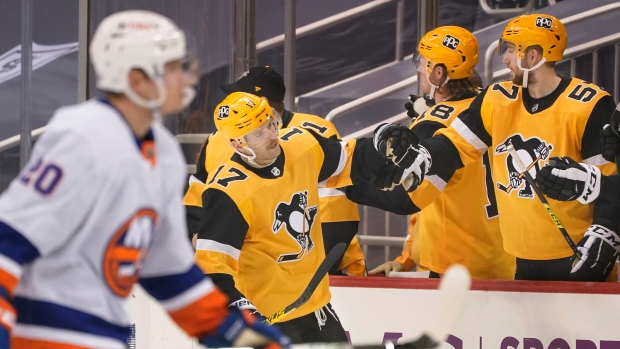 PITTSBURGH — Bryan Rust sat in the penalty box as the New York Islanders trimmed a three-goal deficit to two, then flirted with cutting it to one as the clock ticked down.

When the Pittsburgh Penguins forward hopped out, however, he found another friendly bounce in a night full of them, pouncing on a clearing attempt and racing down the ice to finish off his fourth career hat trick as the Penguins cooled off New York 6-3 on Saturday night.

“There was a wide array of emotions in the box there,” Rust said.

The only ones he felt afterward were a mixture of jubilation and relief after the Penguins pulled within two points of New York and Washington for the top spot in the crowded East Division. Pittsburgh has won 10 of 13 despite a series of injuries that have decimated its forward group.

The Penguins have kept plugging away anyway. Sidney Crosby had a goal and an assist, Evan Rodrigues added his fourth and Frederick Gaudreau scored for the first time in more than two years as Pittsburgh improved to 5-2 against the Islanders.

“That was a really big win for us because that’s who we’re chasing in the standings,” forward Sam Lafferty said.

The Penguins can catch New York with another win when the teams meet again Monday for the eighth and final time during the regular season.

Mathew Barzal ended a 10-game goal drought by picking up his 10th of the season. Anthony Beauvillier and Jordan Eberle also scored for New York, but the Penguins needed just 26 minutes to Ilya Sorokin on their way to building a 5-0 lead.

The 25-year-old rookie had been unbeaten since mid-February, but his eight-game run — one of them a 2-0 shutout win over the Penguins on Feb. 28 — came to an abrupt end after giving up four goals on nine shots before being replaced by Semyon Varlamov.

“I didn’t see enough from anybody, Ilya included,” New York coach Barry Trotz said. "Ilya and the rest of the team. It just wasn’t enough. So change it up. Maybe Varly could stabilize us, and maybe we can crawl back in the game.”

The Penguins are missing five forwards — Evgeni Malkin, Kasperi Kapanen, Jason Zucker, Teddy Blueger and Brandon Tanev — due to injury. All five play on one of Pittsburgh's top three lines, leaving in their place a patched-together group that is starting to take some of the scoring load off Crosby, Rust and Jake Guentzel.

On Thursday night, it was recently promoted forward Radim Zohorna scoring on his first shot in the NHL in a shutout victory over the reeling Sabres.

On Saturday night, it was Gaudreau scoring his first NHL goal since Dec. 31, 2018 that got Pittsburgh rolling. He finished off a rush by taking a crossing pass from Lafferty and flipping it over Sorokin's glove 5:49 into the first period.

Rodrigues made it 2-0 just past the period's midway point when his shot from the top of the circle threaded through a sea of bodies and into the net. The shots were two of just four the Penguins managed in the first period. The Islanders kept Jarry significantly busier. But when Pittsburgh came out flying in the second, New York had little response.

“I think when you look at the roster right now, some of the guys in the lineup have brought an enthusiasm that (rubs off) on the whole group,” Penguins coach Mike Sullivan said. “I think these guys right now are having a positive impact on our hockey team.”

New York scored three straight, eventually pulling within one on Eberle's sixth of the season with 2:27 remaining. The Islanders had several chances to get closer thanks to the penalty on Rust. Jarry made a series of quality stops to keep New York at bay, though Barzal liked the way the Islanders tilted the ice in the third.

“We didn’t shrink,” Barzal said. "We tried to push. We had a great push at the end.”