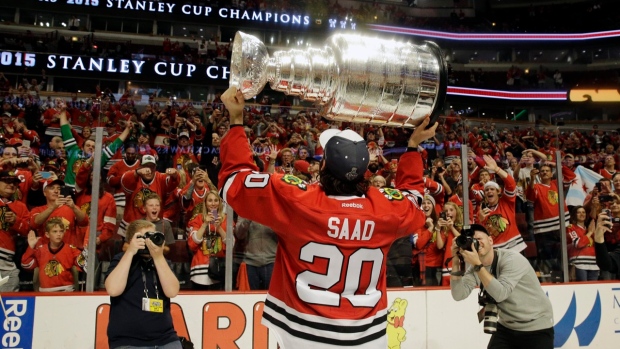 CHICAGO - Moments after Chicago won the Stanley Cup for the third time in six seasons, Stan Bowman went back to work.

The general manager of the Blackhawks found forward Brandon Saad on the ice at the United Center and made plans for more big parties in June. Saad is eligible for restricted free agency this summer, and his contract situation is a key part of the shortened off-season for the champions.

"I just talked to him right after we won," Bowman said after Chicago's clinching victory over the Tampa Bay Lightning in Game 6 on Monday night. "We gave a hug and said, 'This is the first of many. We're going to win a lot together.' He gave me a big hug and said, 'Let's go.' He's going to be here. I don't think he'd want to leave after this scene here."

The sixth NHL title in franchise history was the first time since 1938 that the team wrapped up the championship at home, and it touched off a wild celebration in Chicago complete with honking horns, fireworks and streets all over clogged with fans. The players celebrated in their locker room at the United Center into early Tuesday morning.

"It is surreal every time. And you don't know when you're going to get another chance," captain Jonathan Toews said. "Some people kind of expect you to, and some other people don't give you a shot. At the end of the day, all that matters is what we say and what we think in that room. We've got a group that believes."

The Blackhawks brought the Stanley Cup to Wrigley Field on Tuesday night, and Toews threw a ceremonial first pitch to first baseman Anthony Rizzo before the Cubs hosted the Cleveland Indians. Cubs manager Joe Maddon hoisted the silver trophy over his head in front of the home dugout, and the teams posed for a picture with it on the pitcher's mound.

There are plans for a parade on Thursday, followed by a rally at Soldier Field. But there are some tough decisions coming up on the calendar.

All those years of success come with a price, and the bills start to pile up again this summer.

The twin $84 million, eight-year contract extensions for Toews and Patrick Kane kick in for the 2015-16 season. Forward Marcus Kruger is eligible for restricted free agency, and defenceman Brent Seabrook's contract expires after next season. Even coach Joel Quenneville could be headed for a raise after Mike Babcock got a lucrative deal to take over in Toronto.

The NHL draft begins on June 26 in Florida, and free agency starts on July 1. The salary cap, expected to be about $71.5 million for next season, likely will force the Blackhawks to shed some contracts through trades, but Bowman and company think they can keep the club in title contention for years to come.

"It's a challenge," Bowman said. "It's a system we all play under, so we've got to find a way to make it work. It certainly is a credit to our leadership group on the team. And also my staff has done a fantastic job drafting and developing players. The only way you can make it work in this system is if you have young players you not only draft, but you develop."

Two players who could be on the move for cap relief are forwards Patrick Sharp, who was acquired in a 2005 trade with the Flyers that helped spark Chicago's run of success, and Bryan Bickell.

Sharp, who turns 34 in December, slipped to 16 goals and 27 assists in 68 games after leading Blackhawks with 34 goals and 78 points in the previous season. Bickell, once a reliable scorer in the post-season, has just two goals and five assists in his last 29 playoff games.