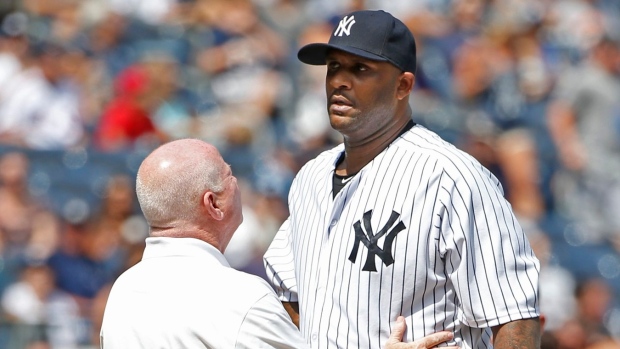 Sabathia struck out Cleveland's Yan Gomes with a 91 mph fastball for the second out of the third. After the pitch, Sabathia stepped off the mound, visibly unhappy, and was visited by athletic trainer Steve Donohue and manager Joe Girardi, then left the game.

"I felt a little bit of pain warming up in the bullpen and when I was in the game," Sabathia said. "I just couldn't finish my pitches like I wanted to."

"It's been a watch for us all along," Girardi said. "I actually thought it was his side the way he leaned, but he said it was his knee."

After coming out of the game, Sabathia underwent an MRI and visited with team physician, Dr. Christopher Ahmad.

"I'm guessing it's a DL off the bat because he left the field without throwing another pitch," Yankees general manager Brian Cashman said. "It seems to imply that it's something serious."

New York is already without Bryan Mitchell (concussion and nasal fracture) and Michael Pineda (right flexor forearm muscle strain). Ivan Nova is in his first season back from Tommy John surgery and Masahiro Tanaka missed time earlier in the year with a right forearm strain and right wrist tendinitis.

Sabathia was limited to only eight starts in 2014, undergoing arthroscopic surgery on his right knee in July.

"CC is tough," Cashman said. "He's been pitching through a lot of stuff over the last numbers of years, so I'm just assuming we're looking at a disabled list instead of having him for another start."

Mitchell is scheduled to throw a simulated game early either Tuesday or Wednesday.

Pineda is expected to be activated from the disabled list and start on Wednesday. With Pineda available, the Yankees were planning on going with a six-man rotation in the short-term, but could now be forced to alter those plans.

"When you have six guys that are capable of doing it, there's some benefit to it," Cashman said. "But if we don't have that, we don't have that and we'll go back to five. Whatever we need is right here for us."