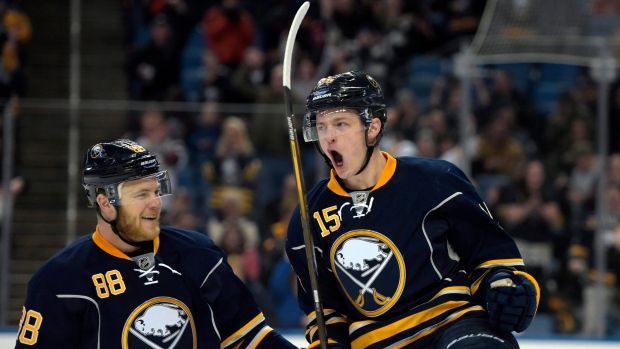 Jack Eichel is staying put in Buffalo for a long, long time.

The Sabres announced on Tuesday evening that they have agreed to terms with their star forward on an eight-year contract extension with an average annual value of $10 million.

8 year contract extension for Jack Eichel in Buffalo is complete. Aav of $10 million per year.

Eichel is entering the third and final season of his entry-level contract that carries a cap hit of $925,000. Performance bonuses could push the total value of the season to $3.775 million.

In 61 games for the Sabres last season after missing time with an ankle injury, Eichel had 24 goals and 33 assists. He slightly out-performed his rookie campaign of 24 goals and 32 assists in 81 games. This season, the Sabres are expecting him to take an even bigger step forward.

Eichel, who turns 21 on Oct. 28, was taken with the No. 2 pick in the 2015 NHL Entry Draft, right behind Connor McDavid. He is a native of North Chelmsford, Mass.

Buffalo will open the season at home on Thursday against Jonathan Drouin and the Montreal Canadiens.