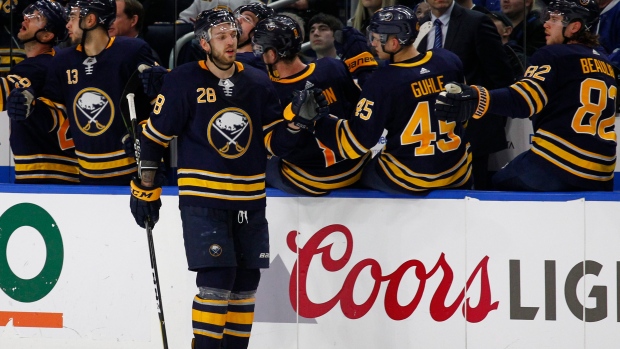 BUFFALO, N.Y. — Don't tell Jason Pominville and the Buffalo Sabres they have nothing to play for.

For a team all but mathematically out of playoff contention, the Sabres continued making a dent in in the Eastern Conference playoff race with a 5-3 win against their cross-border and Atlantic Division rival Toronto Maple Leafs on Monday.

"It's an easy game to get prepared for," said Pominville, one of four Sabres to score a goal and assist. "You know it's going to be a great atmosphere in our building with the fans they get."

The Sabres silenced the large contingent of "Go, Leafs, Go!"-chanting fans by building a 2-0 lead within the first four minutes. And after the Maple Leafs tied the game, Buffalo responded by scoring three times and sealed the victory on Johan Larsson's goal midway through the third period.

Though the Sabres remain at the bottom of the Eastern Conference standings, they improved to 7-5-2 in their last 14 games. It's a three-week stretch during which Buffalo has defeated each of the division's three top teams, including Boston twice.

Pominville also showed he hasn't lost his touch against Toronto.

Re-acquired by the Sabres in a trade last summer after a four-plus-season stint in Minnesota, Pominville now has 19 goals and 50 points in 51 career games with Buffalo against Toronto.

"Wow," the former Sabres captain said. "I should play them more often."

Frederik Andersen stopped 19 shots in allowing five goals for the second consecutive outing after being yanked midway through a 5-2 loss to Washington in an outdoor game played at the U.S. Naval Academy on Saturday.

The only consolation for Andersen this time was he couldn't be faulted on Buffalo's first four goals, all of which were set up by fortunate bounces.

The Sabres led 2-0 after Reinhart and Pominville deflected in shots from the right point by Rasmus Ristolainen. Girgensons put Buffalo up 3-2 when Reinhart's shot from a bad angle banked in off his skate.

The Sabres received yet another break in going up 4-2 when Toronto defenceman Ron Hainsey's clearing attempt struck referee Kendrick Nicholson's skate. The puck caromed directly to O'Reilly, who scored from the right circle.

"That was pretty crazy. I think it seemed like everything just hit something and found a way into the net," Andersen said. "In the big picture, they earned their bounces."

Leafs coach Mike Babcock couldn't fault Andersen, though he took issue with the NHL for allowing Larsson's goal to stand up following a video review for goaltender interference.

After stopping Pominville's one-timer from the left circle, Andersen was knocked off balance from behind by Larsson, who was skating through the crease. Larsson then corralled the rebound and swept it under Andersen.

Babcock challenged the call by saying Larsson first collided with Andersen while the two were in the crease.

"What they told me is he was interfered with outside the paint, which is not true and that, tonight, was goalie interference no matter what way you look at it," Babcock said.

Toronto has matched its longest skid of the season, which comes after the Leafs enjoyed a 13-2 run.

"The bottom line is you've got to get it turned around. We can't continue to lose hockey games," Babcock said.

NOTES: The Sabres continued their home dominance over Toronto, improving to 19-3-1 in their past 23 meetings at Buffalo. ... One of the more amusing moments came when television cameras captured an exchange between Ristolainen and Toronto's Nazem Kadri, after the two were sent to the penalty box for fighting in the second period. Ristolainen held up four fingers in telling Kadri the teams play four more times. Kadri responded by correcting Ristolainen, saying it's only three more times because Monday's game didn't count. ... Maple Leafs LW Matt Martin had an assist while playing for the first time since a 4-2 loss to Colorado on Jan. 22. Martin had been a healthy scratch for 18 consecutive games.

Maple Leafs: Get four-day break before hosting the Pittsburgh Penguins on Saturday.