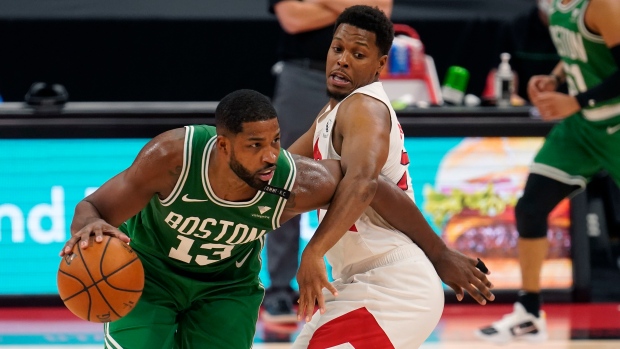 Tristan Thompson is on the move.

ESPN's Adrian Wojnarowski reports the Boston Celtics have traded the Brampton, Ont. native to the Sacramento Kings in a three-team deal also involving Delon Wright, Kris Dunn, Bruno Fernando and a second round pick in 2023.

Wright will head to Atlanta, while Funn and Fernando will join the Celtics.

Thompson, 30, spent last season with the Celtics after nine seasons with the Cleveland Cavaliers.

The Texas product has one year remaining on a two-year, $18.9 million deal signed last offseason.

Dunn, 27, was the fifth overall pick of the 2016 NBA Draft out of Providence and now heads to his fourth team.

A knee injury limited Dunn to only four games last season. Prior to signing with the Hawks, Dunn spent time with the Minnesota Timberwolves and Chicago Bulls.

Fernando, 22, appeared in 33 games for the Hawks last season, his second in the NBA, and averaged 6.8 minutes a night.

Wright, 29, averaged 10.0 points per game in 27 contest with the Kings last season. He has also spent time with the Toronto Raptors, Memphis Grizzlies, Dallas Mavericks and Detroit Pistons throughout the course of his six-year NBA career.